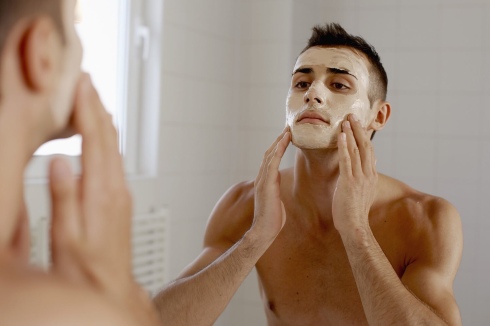 My best friend, who live in Texas, roped me into a Mary Kay Pamper Party. I love my friend, and we’ve known each other for nearly twenty years, but I think she misjudged me when she signed me up for this. I never actually agreed to it, but she promised it would be fun. Boy was she wrong! The Mary Kay representative sent me the samples to use during the Party, and we signed onto Zoom to meet everyone. Luckily, I wasn’t the only man; my friend’s husband also participated.
I tried the moisturizers, sunscreens, and scrubs. I never could get the color correction cream opened, so I didn’t use it, even though the representative said I needed it for the redness in my face. What she failed to realize is that the redness was from the fucking creams she sent me. All of that was done only on the right side of my face; a charcoal mask went on the left side. The mask was yucky and itchy and really hard to get off of my face.
Once we got to the end (finally!), the Mary Kay representative asked me what products I liked best. Being polite, I didn’t tell her I hated them all, so I made up something about liking one of the moisturizers. At last, I was allowed to leave the “party.” I was hoping that would be the end of it, alas, it was not. The Mary Kay rep sent me a text asking me how I wanted to pay for the moisturizer. The nerve! I hadn’t said I’d buy anything. I decided I just had to be completely honest with her or she’d never leave me alone, so I wrote back, “ I’m not going to need any. To tell you the truth I have chronic migraines and the smell of the products is very strong and triggered one of my headache. Sorry. I just won’t be able to use it.”
I told my friend that I did not want to do the follow-up parties. There are supposed to be three in all, which I did not know beforehand. There was no way I was going to try and convince any of my friends up here into this. First of all, women in Vermont do not wear makeup, only my drag queen friends do. Second, my two friends who do wear makeup, they are from the South, would not be interested in this. I hated the whole experience and did not want to put anyone else through this, plus I found the Mary Kay rep a bit insulting. She told me my face was red and blotchy, I have a very nice tanned complexion. Furthermore, she called out two of the women for being old and needing special products. I’m sure that’s true, but hell, be a little more tactful.
After all was said and done, the smell really was giving me a headache. It was so strong and sweet. I’m gay, I like the smell of a man, not a woman. So I had to take a shower to wash the smell off of me. There was no way I was going to go to bed having to smell Mary Kay. Once I smelled like me again, my headache did abate a bit, and so I went to bed.

I began my life in the South and for five years lived as a closeted teacher, but am now making a new life for myself as an oral historian in New England. I think my life will work out the way it was always meant to be. That doesn't mean there won't be ups and downs; that's all part of life. It means I just have to be patient. I feel like October 7, 2015 is my new birthday. It's a beginning filled with great hope. It's a second chance to live my life…not anyone else's. My profile picture is "David and Me," 2001 painting by artist Steve Walker. It happens to be one of my favorite modern gay art pieces. END_OF_DOCUMENT_TOKEN_TO_BE_REPLACED
This entry was posted on Wednesday, May 13th, 2020 at 6:00 am and posted in Miscellaneous. You can follow any responses to this entry through the RSS 2.0 feed.
« Pic of the Day
Pic of the Day »