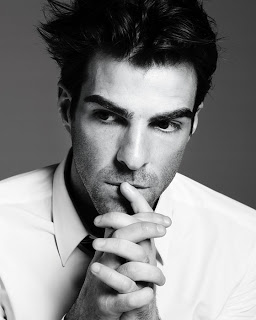 Zachary Quinto, inheritor of the iconic Mr. Spock role in JJ Abrams’ “Star Trek” reboot and the star of the upcoming film “Margin Call,” reveals that he is gay in a new profile in New York Magazine. The star, 34, credits his role in the Broadway play “Angels In America,” in which he plays a gay man who leaves his AIDS-afflicted boyfriend, for helping to put him further in touch with the hopes felt and struggles faced by both gay and straight Americans, and discusses his political outlook for the rights movement.

While Quinto’s sexuality hasn’t exactly been a big Hollywood secret, he’s been pretty clear in the past that he’d rather focus on his advocacy for gay rights than his personal life. Last year he told the New York Times,

The fact that these things are such hot-button issues right now, socially and politically, I would much rather talk about that than talk about who I sleep with. I would love to be a voice in this maelstrom of chaos and obsessive celebrity infatuation that says, ‘Let’s talk about something that matters.’

So it was a bit surprising to some people when he seemed to casually refer to himself as a gay man to New York magazine recently. Quinto was talking about his role in the Broadway play “Angels In America,” in which he plays a gay man who leaves his AIDS-afflicted boyfriend. He said,

Doing that play made me realize how fortunate I am to have been born when I was born. And to not have to witness the decimation of an entire generation of amazingly talented and otherwise vital men. And at the same time, as a gay man, it made me feel like I — there’s still so much work to be done. There’s still so many things that need to be looked at and addressed.

In the interview Quinto also mentioned the recent suicide of bullied gay teen Jamey Rodemeyer, saying “as a gay man I look at that and say there’s a hopelessness that surrounds it.”

Last night, Quinto posted a blog entry on his own website that explained some of the thinking that had led him to publicly announcing his orientation:

In light of [Rodemeyer’s] death – it became clear to me in an instant that living a gay life without publicly acknowledging it – is simply not enough to make any significant contribution to the immense work that lies ahead on the road to complete equality. I believe in the power of intention to change the landscape of our society – and it is my intention to live an authentic life of compassion and integrity and action. Jamey Rodemeyer’s life changed mine. And while his death only makes me wish that I had done this sooner – I am eternally grateful to him for being the catalyst for change within me.

To me, the power of what he’s saying goes beyond the issue of sexuality—when I read those words I am touched by the passion in his belief, and the bravery of choosing to come out, and yet not make a huge deal of it. Who among us isn’t striving for a life of authenticity?  A large part of what I discussed in my post about Emerson’s “Self-Reliance” is that we should strive for a life of authenticity. How many of us would be willing to so publicly state our intent to live with compassion, integrity, and action?  I would hope that we all are. I imagine the hard work it took for him to get to this place, and the courage it took to say it.  I am very proud of Zachary Quinto for coming out and for being an inspiration to others.

In an industry that’s so often focused on surface pursuits, I think Zachary Quinto is an absolutely amazing man who should be commended not for disclosing the details of his personal life, but for taking an enormously difficult step to make a difference in the lives of others.

I began my life in the South and for five years lived as a closeted teacher, but am now making a new life for myself as an oral historian in New England. I think my life will work out the way it was always meant to be. That doesn't mean there won't be ups and downs; that's all part of life. It means I just have to be patient. I feel like October 7, 2015 is my new birthday. It's a beginning filled with great hope. It's a second chance to live my life…not anyone else's. My profile picture is "David and Me," 2001 painting by artist Steve Walker. It happens to be one of my favorite modern gay art pieces. END_OF_DOCUMENT_TOKEN_TO_BE_REPLACED
This entry was posted on Wednesday, October 19th, 2011 at 7:55 am and posted in Coming Out, Gay Icon. You can follow any responses to this entry through the RSS 2.0 feed.
« Androgyne, Mon Amour
Support LGBT Youth: Wear Purple for Spirit Day »

7 responses to “Zachary Quinto Comes Out”