Category Archives: Word of the Week

The English word of Greek origin “callipygian” indicates someone who has beautiful buttocks. However, the qualities that make buttocks beautiful or well-formed are not fixed, as sexual aesthetics of the buttocks vary considerably from culture to culture, from one period of fashion to another and even from person to person.

That’s not exactly right, somehow, but close enough. Generally speaking, when it comes to pygophilia, the bigger the bootie the better… within reason. Enter the bubble butt.

Bubble butts have long been a desirable trait. In fact, when tightly packed into jeans, they often translate into free drinks at the bar, lots of bad pickup lines, and some serious grab-ass as the night wears on. An ample arse on Manhunt often elicits messages of “nice butt, man,” or “hot ass, dude,” and other more explicit enthusiasms.

We have this one coach at school who has the most amazing butt. It’s truly mesmerizing and since he often wears athletic shorts, I have a greater appreciation for the way shorts can accentuate a man’s behind. I often have to tear my eyes away from his cute behind, mainly because I don’t want to get caught staring. Sometimes you just have to take in the beauty from behind. 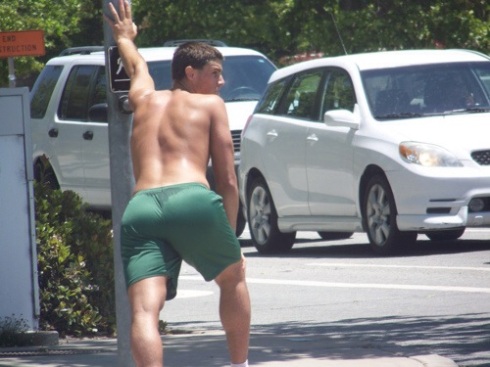 Leave a comment | posted in Word of the Week

A sapiosexual is one who finds intelligence the most sexually attractive feature.

I want an incisive, inquisitive, insightful, irreverent mind. I want someone for whom philosophical discussion is foreplay. I want someone who sometimes makes me go ouch due to their wit and evil sense of humor. I want someone that I can reach out and touch randomly, and I want that someone to be somebody that I can cuddle with. I have decided all that means that I must be a sapiosexual.

I also want someone that won’t find me boring I have a lot of trivial knowledge in my head and have been described as being very passionate about many topics. Sometimes that knowledge comes pouring out and I want someone who eyes will not glaze over with utter boredom.

Occasionally, I come across a word that just fascinates me. Sapiosexual came from the Urban Dictionary. This particular word seemed to describe me pretty well. The one ing I would add is that I would prefer that other person have a penis. I guess that makes me a “homo” sapiosexual. How many of you would describe yourself as a “homo” sapiosexual.

I was recently shocked by a student of mine who described something as “fantabulous.”  I had heard the word (maybe even used it myself), but I would have never used slang in a paper I turned in to one of my professors.  I do not consider slang to be proper English and therefore not a real word.  So I decided to look it up and see if it was in the dictionary.  It was in online dictionaries, and of course, it was listed in UrbanDictionary.com.
According to UrbanDicitonary.com:

Are you tired of your old gay quotes?
Doesn’t fantastic just feel like it used to?
Is fabulous already soooo used?
Then Fantabulous is for you!
Now with 50% more gay!

I hope you have a fantabulous day today.  I only have one more half-day of school (the students were gone on Friday), now it is just getting everything ready for summer and tying up loose ends. Who knew teachers did so much after school was out?

5 Comments | posted in Word of the Week

Word of the Week: Tyromancy

So I am a total geek.  I will admit it.  Usually when I drive, I have my radio on NPR.  Yesterday, I was listening to Lynne Rossetto Kasper’s show, The Splendid Table.  I am also a bit of a foodie.  I can talk food anyplace, anytime.  So for me this is a great show, and I can get some good ideas about cooking.  Well, yesterday’s trivia question was about the word Tyromancy, which I found fascinating.

Tyromancy is divination by cheese – by the interpretation of the signs that appear as the cheese coagulates. Unfortunately, no book written by an enlightened one has appeared to help us read those signs, so we must make it up as we go along, or rely on our intuitive interpretation.  The word tyromancy is derived from the Greek tūros (‘cheese’) and manteia (‘prophecy’).

During the Middle Ages, Tyromancy was used to predict the future by looking at the shape, number of holes, pattern of the mold and other characteristics of the cheese. It was also practiced to prognosticate love, money and death.

Tyromancy was also used by young maidens in countryside villages to predict the names of their future husbands. They write the names of their prospective suitors on separate pieces of cheese and the one whose name was on the piece of cheese where molds grew first was believed to be the ideal love mate.

Another method involves writing the possible answers to a question on separate pieces of cheese and placing them in a cage with hungry rodent. The piece that the mouse ate first will be the answer to the question. This form of divination was related to Myomancy.

Omens were also drawn from the patters and designs formed by the coagulation of cheese.

Here’s a recipe that might tell us who our future husband will be:

5 Comments | posted in Word of the Week