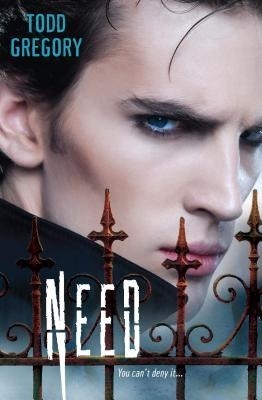 The latest book on my must read list, plus starting back to school this week has left me wanting for sleep.  I started reading Todd Gregory’s Need

is Cord Logan, who readers were first introduced to in the short story “Blood on the Moon” in the Midnight Hunger

anthology of gay vampire stories, so I read that story again before reading Need

is a stand alone book, but it really helps if you read Cord’s backstory first.

At the beginning of Need

is erotically charged throughout, and some might complain that it has more sex scenes than substance, but the sex scenes actually do add to the story, which is what a good sex scene should do.  I admit though that some of the scenes seem a little too gratuitous, but they are a hell of a lot of fun to read.
Also, like many gay novels, Gregory creates a fascinating, lovable, and snarky female character, much as he does as Greg Herren with the characters Paige Tourneur and Venus Casanova in his Chance McLeod mysteries.  This time the character is Rachel, a female vampire with razor sharp wit, that I couldn’t help but love.
The ending appear to me that Need has potential to go into a series. The curse that lead Cord from baby vampire making poor decisions to the very different vampire Cord is at the end of the book opened some interesting possibilities. I would love to read more of Cord if this did turn into a series. The events at the end definitely have my curiosity piqued.
There are parts of the boom also that feels somewhat repetitive and in some parts scenes seem to contradict something we have already learned, but I can forgive that, hopefully you can too.
The major drawback of this book for me, and this is for me personally, is that Herren/Gregory seems to have a deep seeded hatred of the Church of Christ.  Both Chance McLeod and Cord Logan’s characters were raised in harsh, fundamentalist Church of Christ congregations.  I tend to be able to get over it because I just replace Church of Christ with another denomination.  It’s hard for me to read such criticisms of a church I deeply love, but then I was raised in a very loving church.  I have never found out why the Churches of Christ make appearances in Herren/Gregory’s writing.  I can only assume that Herren was raised in a harsh Church of Christ, very unlike the one I was raised in.  One day, I hope to have the chance to ask him that question.  It certainly will never stop me from reading his books.
PS If you have emailed me in the last week, I will get back to you this weekend.  With preparations for school starting and school itself, I have been too tired at the end of the day to respond to emails.  I will though.  I also blame Todd Gregory’s Need

for my lack of response because I’ve read each night until I have to force myself to go to bed.  So please forgive me.

I began my life in the South and for five years lived as a closeted teacher, but am now making a new life for myself as an oral historian in New England. I think my life will work out the way it was always meant to be. That doesn't mean there won't be ups and downs; that's all part of life. It means I just have to be patient. I feel like October 7, 2015 is my new birthday. It's a beginning filled with great hope. It's a second chance to live my life…not anyone else's. My profile picture is "David and Me," 2001 painting by artist Steve Walker. It happens to be one of my favorite modern gay art pieces. END_OF_DOCUMENT_TOKEN_TO_BE_REPLACED
This entry was posted on Thursday, August 15th, 2013 at 7:00 am and tagged with Arts, Blood on the Moon, Cord Logan, Erotic literature, Fiction, Greg Herren, Need, New Orleans, Sex in film, Short story, Todd Gregory, Vampire, Vampires and posted in Book Review. You can follow any responses to this entry through the RSS 2.0 feed.
« Ken Bencomo, Gay Catholic Teacher Fired For Marrying, Gets Huge Student Support
Bayard Rustin Will Posthumously Be Awarded the Presidential Medal of Freedom »