The 27-year-old shows off his movie star good looks in the nautical-themed shoot, which has him smoking on a cigar, posing shirtless, wearing summer whites and flaunting his toned legs in navy shorts. 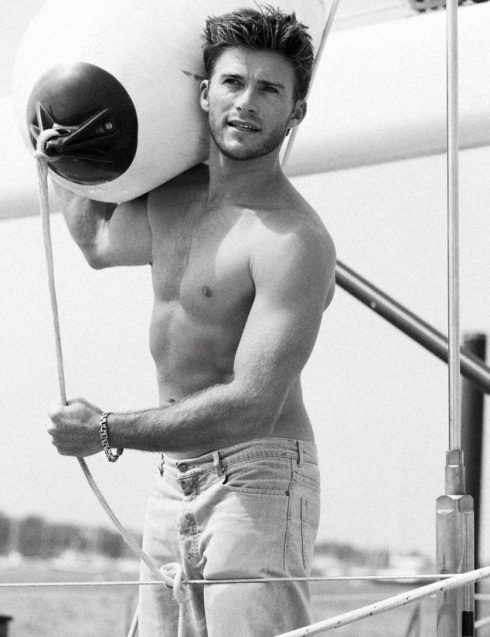 But the hottie’s life hasn’t always been this glamorous despite his famous last name.Eastwood told the magazine that he has worked every job imaginable from bartending to working construction.

“People assumed that I would have everything handed to me, but that couldn’t be further from the truth,” he says. “I was on my own just doing the grind.”

But his filmmaker father, who had Scott with flight attendant Jacelyn Reeves, helped him find work in Hollywood for roles in Eastwood-directed “Flags of Our Fathers,” “Gran Torino” and “Trouble With the Curve.” He can also be seen in the Brad Pitt movie “Fury” and the upcoming movie “The Longest Ride” based on the Nicholas Sparks novel of the same name.

I began my life in the South and for five years lived as a closeted teacher, but am now making a new life for myself as an oral historian in New England. I think my life will work out the way it was always meant to be. That doesn't mean there won't be ups and downs; that's all part of life. It means I just have to be patient. I feel like October 7, 2015 is my new birthday. It's a beginning filled with great hope. It's a second chance to live my life…not anyone else's. My profile picture is "David and Me," 2001 painting by artist Steve Walker. It happens to be one of my favorite modern gay art pieces. END_OF_DOCUMENT_TOKEN_TO_BE_REPLACED
This entry was posted on Monday, February 16th, 2015 at 7:00 am and posted in MCM. You can follow any responses to this entry through the RSS 2.0 feed.
« Love Is Our Nature
O Captain! My Captain! »