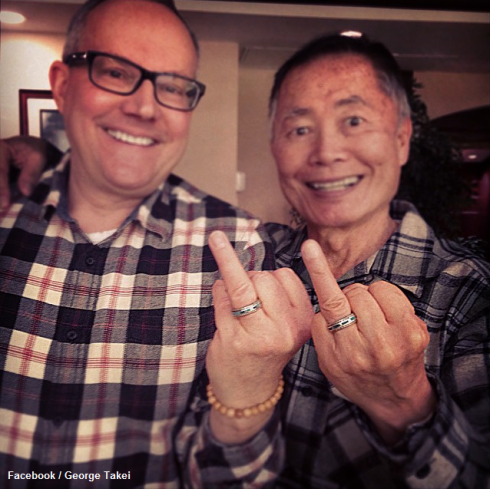 ﻿”Star Trek” icon George Takei is lending a hand — or, rather, a finger — to the battle for marriage equality in Alabama by helping to launch a social media effort in protest of Alabama’s recent halt on same-sex marriages.

The actor and outspoken lesbian, gay, bisexual and transgender (LGBT) rights activist shared a photo of himself with his husband, Brad Takei, on Instagram and Twitter calling for his followers to give Alabama “the wedding finger” in response to the state’s apparent backtracking on marriage equality.

“I’m going to say it. Alabama is really starting to piss me off,” Takei wrote in a separate Facebook post.

In an email sent to The Huffington Post, Takei said:

I was genuinely dismayed to hear that a state’s highest court would flout a federal court order, which was left to stand by both the Court of Appeals and the U.S. Supreme Court. This is grandstanding at its worst, and it is extraconstitutional.
You know, 60 years ago it wasn’t considered a real marriage if a white person wanted to marry an Asian American like me. And now look, I married a white dude. Times change. Attitudes change. And for the better.
We decided to speak out in this somewhat tongue in cheek way to make an important point. It is all about love, and we, as a same-sex couple, just want the same right to have our love recognized.
We hope enough couples, gay and straight, join with us to make this point. We’ll be collecting up the pics, all tagged with the hashtag #LuvUAlabama plus each couple’s home state, to create a mosaic of support for marriage equality. We hope Alabama, too, soon joins the right side of history, as all of America one day will.

Only time will tell if the effort will have an impact in Alabama, where the battle for same-sex marriage has taken some unexpected twists in recent weeks.

In January, a federal judge found that the state’s ban on same-sex marriage was unconstitutional, while a number of probate judges promptly refused to comply with the ruling.

Although the U.S. Supreme Court refused in February to halt same-sex marriages in Alabama, the Alabama Supreme Court ordered probate judges to stop issuing marriage licenses to same-sex couples statewide in what has been deemed “a defiant ruling” on March 3.

So let’s all give Alabama the finger…the wedding finger.

I began my life in the South and for five years lived as a closeted teacher, but am now making a new life for myself as an oral historian in New England. I think my life will work out the way it was always meant to be. That doesn't mean there won't be ups and downs; that's all part of life. It means I just have to be patient. I feel like October 7, 2015 is my new birthday. It's a beginning filled with great hope. It's a second chance to live my life…not anyone else's. My profile picture is "David and Me," 2001 painting by artist Steve Walker. It happens to be one of my favorite modern gay art pieces. END_OF_DOCUMENT_TOKEN_TO_BE_REPLACED
This entry was posted on Friday, March 6th, 2015 at 7:00 am and posted in Gay Icon, News. You can follow any responses to this entry through the RSS 2.0 feed.
« A Temporary Setback
Moment of Zen: Morning Coffee  »