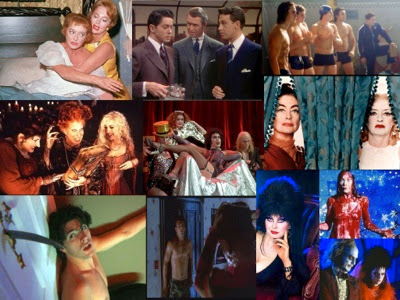 Dark, twisted tales that feed our need for revenge. Sexy scenes with hunky young bucks all desperately yearning to get laid. Gory sights and demented deeds that are so over-the-top they border on camp.
These are the staples of fright flicks, and though society may suspect that gays shy away from horror and violence, the truth is that we love it in films that speak to our unique sensibilities. So in honor of Halloween I compiled a list of our 13 favorites.
So sit back, cuddle closely with your man (or bestest girlfriends) and enjoy the show. 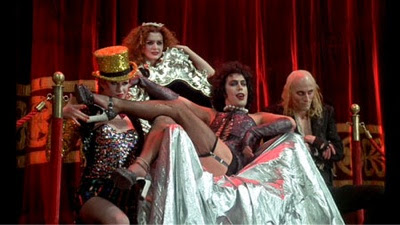 Rocky Horror Picture Show (1975)
It’s the weird and wonderful as newly engaged couple Brad and Janet encounter a problem when they car halts in the rain. They both look for contact only to find themselves at the castle of Dr. Frank-N-Furter a transvestite. A place to stay is offered, but will Brad and Janet want to remain there? Especially when a large group of Transylvanians dance to the ‘Time Warp’, Dr. Frank-N-Furter builds his own man and a whole host of participation for the audience to enjoy. This movie is high camp horror at its best. 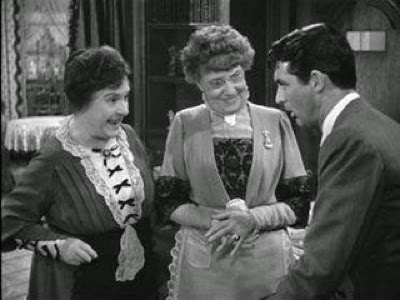 Arsenic and Old Lace (1944)
Mortimer Brewster is a newspaperman and author known for his diatribes against marriage. We watch him being married at city hall in the opening scene. Now all that is required is a quick trip home to tell Mortimer’s two maiden aunts. While trying to break the news, he finds out his aunts’ hobby; killing lonely old men and burying them in the cellar. It gets worse.  Who could not love this movie? 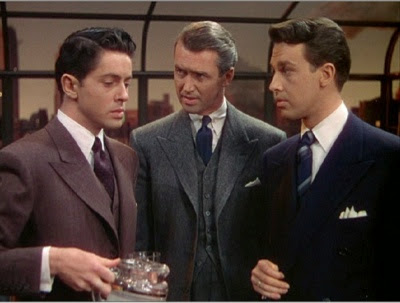 Rope (1948)
Inspired by real-life convicted killers (and lovers) Leopold and Loeb, Rope is Alfred Hitchcock’s gayest film ever. It features a gay couple (played by John Dall, and bisexual Farley Granger at his most luminous), a dinner party, witty repartee, and a body hidden in a stylish piece of furniture. Sounds like summers in Fire Island to me. 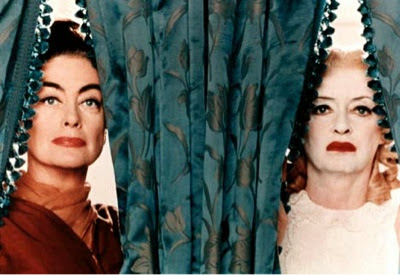 What Ever Happened to Baby Jane? (1962)
Cast two gay icons—Bette Davis and Joan Crawford—as crazy / tragic protagonists, then have them abuse one another while performing at level 10, and you’ve got one of the most camptastic movies ever made. The dialogue is deliciously mean, the hatred between these two actresses leaks off the screen, and because the characters’ bitter back-story creates a strong foundation you have a solid film rather than one of those “so-bad-it’s-good” features gays love so much.
Best served in a crowd of drunk gays who can truly appreciate the dark humor. 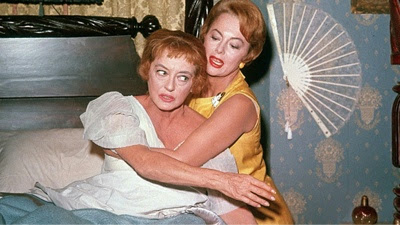 Hush…Hush, Sweet Charlotte (1964)
If Whatever Happened to Baby Jane? makes the list, this movie is also a must.  Charlotte Hollis, an aging recluse deluded into a state of dementia by horrible memories and hallucinations, lives in a secluded house where, thirty-seven years before, John Mayhew her married lover, was beheaded and mutilated by an unknown assailant.  Plus, there is always the back story behind why Joan Crawford refused to make this “sequel” and the why Vivian Leigh refused the role (Leigh famously said “I can just about stand to look at Joan Crawford at six in the morning on a southern plantation, but I couldn’t possibly look at Bette Davis.”)  Also, Agnes Moorehead is in this movie, not only was she the mother on Bewitched, but she was also a well-known lesbian.

Carrie (1976)
Along with Baby Jane, Mommie Dearest and Showgirls, Carrie is one of the films with dialogue most quoted by gay men. Gems like “I can see your dirty pillows,” to a screeching “They’re all gonna laugh at you!” and “They’re called breasts, and every woman has them…” have become part of the secret language of gays. And Carrie’s prom night-mare has become pop culture shorthand on TV shows from Ugly Betty to RuPaul’s Drag Race. 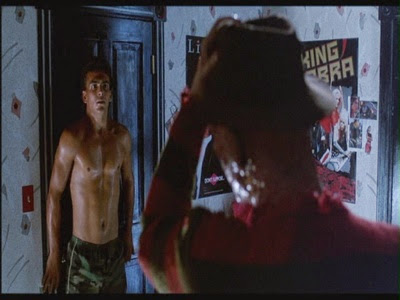 Nightmare on Elm Street 2: Freddy’s Revenge (1985)
New Line Cinema’s second schlep up to Elm Street is bursting at the seams with homoerotic imagery and undertones. It features openly gay actor Mark Patton as Jesse, a teenage boy Freddy Krueger tries to possess in order to leave dreamland and continue his killing spree in the real world.
Even before the film’s writer, David Chaskin, admitted to including the screenplay’s gay subtext in the 2010 documentary Never Sleep Again: The Elm Street Legacy, Nightmare 2 had been herald as the ultimate homo-horror flick for years by countless fans.
A film about a boy struggling to repress “something” inside of him would have been enough to brand Nightmare 2 as an obvious gay allegory. However, it’s the moments following Jessie’s trek into a gay leather bar—where he discovers his P.E. coach—that rank this film among the gayest of all time. After all, tying up your coach in the locker-room showers and snapping his bare ass with a towel before you kill him from behind will earn you that kind of reputation.

Beetlejuice (1988)
Aside from featuring Alec Baldwin at the height of hotness, Tim Burton’s Beetlejuice has enough camp to be welcome at any homo-Halloween haunt. The film’s quirky style has held up amazingly well since it debuted over 23 years ago, and Winona Ryder’s Lydia Deetz is a queer cinema classic. From the interior decorator played by the late openly-gay actor Glenn Shadix to outrageous musical numbers, there isn’t much about this film that isn’t gay. Elvira, Mistress of the Dark (1988)
The Queen of Halloween’s first feature film has become a gay camp-classic for all the reasons that made Elvira one of the biggest gay icons of all time. Over-the-top in every way possible, from the costumes and sassy one-liners to the big musical number ending stuffed with hunky shirtless male dancers, Elvira, Mistress of the Dark is the Showgirls of Halloween movies.
Check it out. 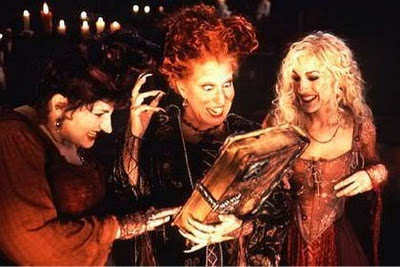 Hocus Pocus (1993)
This poor film has a bad reputation, and some of it is deserved. The movie is about time-displaced witches who fly on vacuums and sing songs, and the kids who must set things right. But it’s also a delightfully fun bad movie, comes from Disney and director Kenny Ortega (famous for the High School Musical franchise), and stars gay faves Bette Midler, Sarah Jessica Parker, and Kathy Najimy (fresh of her stint in Sister Act). No, it’s not brilliant filmmaking, however it works for babysitting, if you’re in the mood for something light, and if you can mix a potion of vodka and… well… anything… to go along with your screening. 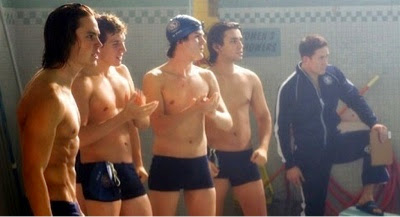 The Covenant (2006)
Abercrombie &amp; Fitch goes supernatural in this good warlock vs. bad warlock fantasy/horror flick starring models-turned-actors Steven Straight (10,000 B.C.) and Taylor Kitsch (Friday Night Lights), as well as a pre-shag Chace Crawford. Between that and this picture, do you need any further explanation on why you should rent it? 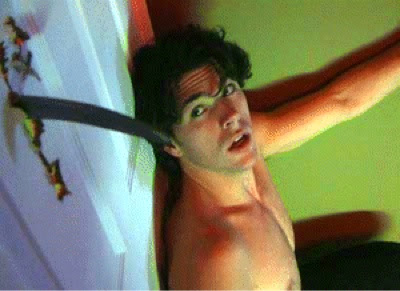 Hellbent (2004)
Two gay men on a date are murdered the night before Halloween in West Hollywood, California. Eddie and his friends Joey, Chaz and Tobey are going out the following night to the West Hollywood Halloween festival when they encounter the psycho, who sets his eye on them. The killer stalks them through the festival as Chaz parties, Joey chases his jock crush, Tobey tries dressing in drag, and Eddie pursues Jake, the bad boy he wants to get to know better. Not until the very end do you find out who dies and who survives their night of terror.

I began my life in the South and for five years lived as a closeted teacher, but am now making a new life for myself as an oral historian in New England. I think my life will work out the way it was always meant to be. That doesn't mean there won't be ups and downs; that's all part of life. It means I just have to be patient. I feel like October 7, 2015 is my new birthday. It's a beginning filled with great hope. It's a second chance to live my life…not anyone else's. My profile picture is "David and Me," 2001 painting by artist Steve Walker. It happens to be one of my favorite modern gay art pieces. END_OF_DOCUMENT_TOKEN_TO_BE_REPLACED
This entry was posted on Monday, October 31st, 2016 at 7:00 am and posted in Movie Review. You can follow any responses to this entry through the RSS 2.0 feed.
« God’s Help
What Shines Does Not Always Need To »