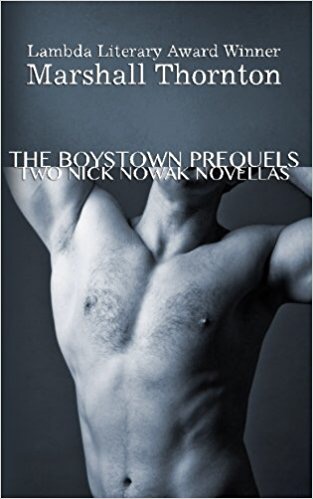 Little Boy Dead takes place during the 1979 Film Fest Chicago where Nick has gotten a job as a driver and as head of security. In a very short time, Nick deals with stalking fans, a crowd of protesters, and a critic’s stolen wallet that leads to murder. The novella is fast paced and an easy read. Oh and Nick is a bit of a slut since the breakup with his boyfriend, so there are plenty of steamy sex scenes.

As soon as I finished reading the first prequel, I immediately started on Little Boy Afraid. It’s now the winter of 1980 and Nick has one of his first jobs working for an openly-gay state senate candidate. The candidate has been receiving death threats, a lot of them, and it’s Nick’s job to keep him alive until the election.

I really enjoyed both novellas. I love how he adds a little bit of history in the novellas such as the peanut farmer running for president. I have one question though: who ran for president in 1980 who became famous selling 20 Mule Team Borax? The choices seem to be Ted Kennedy, U.S. senator from Massachusetts, Jerry Brown, governor of California, and Cliff Finch, former governor of Mississippi. None seem to fit the bill.

I highly recommend the Boystown prequels. I can’t wait to delve into Thornton’s other Boystown detective books.

I began my life in the South and for five years lived as a closeted teacher, but am now making a new life for myself as an oral historian in New England. I think my life will work out the way it was always meant to be. That doesn't mean there won't be ups and downs; that's all part of life. It means I just have to be patient. I feel like October 7, 2015 is my new birthday. It's a beginning filled with great hope. It's a second chance to live my life…not anyone else's. My profile picture is "David and Me," 2001 painting by artist Steve Walker. It happens to be one of my favorite modern gay art pieces. END_OF_DOCUMENT_TOKEN_TO_BE_REPLACED
This entry was posted on Monday, November 27th, 2017 at 7:00 am and posted in Book Review. You can follow any responses to this entry through the RSS 2.0 feed.
« Patience
Chicago »