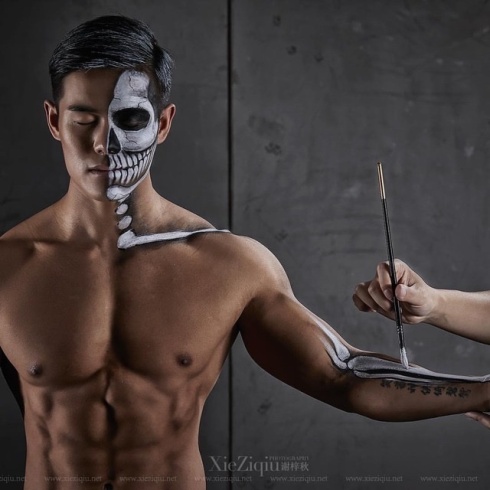 Here once, through an alley Titanic,
Of cypress, I roamed with my Soul—
Of cypress, with Psyche, my Soul.
These were days when my heart was volcanic
As the scoriac rivers that roll—
As the lavas that restlessly roll
Their sulphurous currents down Yaanek
In the ultimate climes of the pole—
That groan as they roll down Mount Yaanek
In the realms of the boreal pole.

Our talk had been serious and sober,
But our thoughts they were palsied and sere—
Our memories were treacherous and sere—
For we knew not the month was October,
And we marked not the night of the year—
(Ah, night of all nights in the year!)
We noted not the dim lake of Auber—
(Though once we had journeyed down here)—
We remembered not the dank tarn of Auber,
Nor the ghoul-haunted woodland of Weir.

And now, as the night was senescent
And star-dials pointed to morn—
As the star-dials hinted of morn—
At the end of our path a liquescent
And nebulous lustre was born,
Out of which a miraculous crescent
Arose with a duplicate horn—
Astarte’s bediamonded crescent
Distinct with its duplicate horn.

And I said—”She is warmer than Dian:
She rolls through an ether of sighs—
She revels in a region of sighs:
She has seen that the tears are not dry on
These cheeks, where the worm never dies,
And has come past the stars of the Lion
To point us the path to the skies—
To the Lethean peace of the skies—
Come up, in despite of the Lion,
To shine on us with her bright eyes—
Come up through the lair of the Lion,
With love in her luminous eyes.”

I replied—”This is nothing but dreaming:
Let us on by this tremulous light!
Let us bathe in this crystalline light!
Its Sybilic splendor is beaming
With Hope and in Beauty to-night:—
See!—it flickers up the sky through the night!
Ah, we safely may trust to its gleaming,
And be sure it will lead us aright—
We safely may trust to a gleaming
That cannot but guide us aright,
Since it flickers up to Heaven through the night.”

Thus I pacified Psyche and kissed her,
And tempted her out of her gloom—
And conquered her scruples and gloom:
And we passed to the end of the vista,
But were stopped by the door of a tomb—
By the door of a legended tomb;
And I said—”What is written, sweet sister,
On the door of this legended tomb?”
She replied—”Ulalume—Ulalume—
‘Tis the vault of thy lost Ulalume!”

Then my heart it grew ashen and sober
As the leaves that were crispèd and sere—
As the leaves that were withering and sere,
And I cried—”It was surely October
On this very night of last year
That I journeyed—I journeyed down here—
That I brought a dread burden down here—
On this night of all nights in the year,
Oh, what demon has tempted me here?
Well I know, now, this dim lake of Auber—
This misty mid region of Weir—
Well I know, now, this dank tarn of Auber—
In the ghoul-haunted woodland of Weir.”

I began my life in the South and for five years lived as a closeted teacher, but am now making a new life for myself as an oral historian in New England. I think my life will work out the way it was always meant to be. That doesn't mean there won't be ups and downs; that's all part of life. It means I just have to be patient. I feel like October 7, 2015 is my new birthday. It's a beginning filled with great hope. It's a second chance to live my life…not anyone else's. My profile picture is "David and Me," 2001 painting by artist Steve Walker. It happens to be one of my favorite modern gay art pieces. END_OF_DOCUMENT_TOKEN_TO_BE_REPLACED
This entry was posted on Tuesday, October 22nd, 2019 at 7:00 am and posted in Poetry. You can follow any responses to this entry through the RSS 2.0 feed.
« Pic of the Day
Pic of the Day »