10 Random and Interesting Facts That Will Cheer You Up 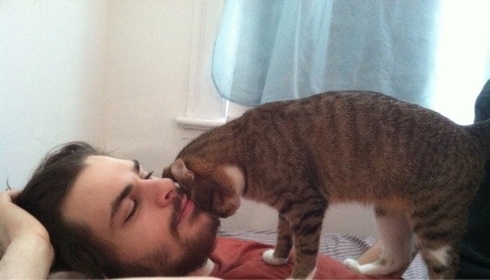 1. For a brief moment in time, you were a moment in someone’s life. A mere extra, passing through their thoughts in milliseconds, but milliseconds of their story nonetheless. For every person you’ve exchanged eye contact with, you have made a contribution to their existence, be it significant or not.

2. Every cow has their own best friend that they hang around every day.

3. If you took the whole solar system and shrunk it down so that the Sun was at your head and the orbit of Pluto was at your feet, Uranus would be just where you’d expect it to be.

4. During the space race, the Apollo astronauts were given sleeves in which to put their dicks and piss in a bag. The problem was that they kept slipping off, because none of them would take first two of the three size options: Small, Medium, Large.
Instead of redesigning the entire system, NASA came up with a simple solution. They relabeled them as Large, Gigantic, and Humongous. The problem was solved.

5. The man who does Winnie the Pooh’s voice spends some of his spare time ringing up children in the cancer wards of hospitals putting on Winnie’s voice and telling them how much he loves them and how brave they are.

6. The fact that you are here is amazing. When you think about your entire ancestry, how many close calls and amazing coincidences could have completely erased half your family? The fact that everything lined up JUST RIGHT in order for you to be here is absolutely amazing.

8. Otters have a pocket in their skin to keep their favorite rock in. Otters have to use rocks to crack open the hard shells of mollusks they eat. Some otters keep the same rock their entire lives and store it in this skin flap.

9. Cats will headbutt you to show their affection. Just to remind you that they love you, cats will often gently headbutt your leg, or whatever body part they can reach. This behavior may even be a type of Territorial marking — your cat wants everyone else to know you’re taken.

Out on the Ice