Pearled semen trickles from vessel
as the silence of possibilities dries
on the floor and inside my palm.

Even now, as the body trembles
from the pleasure of its making,
somewhere, a plane
is pregnant with death.

When starlight sparkling
on the surface of falling bombs
and flames turn muscle
into pompous, skin into ash,

the sound of a scream in mid-death,
straining to push the weight
of last words, can you blame the hand
for craving the softest parts?

Reach down, there is music
in the body, play yourself
like a lyre, insert the finger
into sanctum, feel
the quivering of crevices, skin
palpitating ripples as if stretched
over drumbeats.

Reach down. Let explosions be muted
by climaxes, the Holy Water
between your thighs flow
into rivulets of cleansing,
let it rinse the soil of drying blood.
Reach down, there is music
in the cunt, the cock,
the asshole. Grab your balls—
that grenade of white flowers.

Reach down as fathers destroy the sons
and daughters of other fathers,
as faces emerge from wombs
and exiled into memory.
Reach down as a thousand I love you’s
fail to reach the man caressing
the trigger’s black tongue.

Because even now, in a city shimmering
from shards of broken halos,
we are not holy, only beautiful.
Because even now as I kneel to wipe
this cooling pool of sperm,

down the hall—a man
is beating madness into a child’s skull,
and not once will I ask
my unborn children
to forgive
this hand. 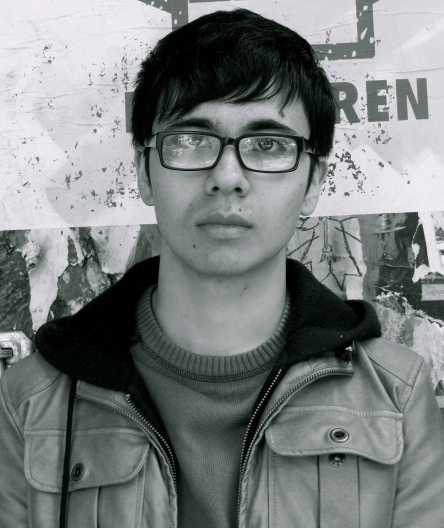 Born in 1988 in Saigon, Vietnam, Ocean Vuong was raised by women (a single mother, aunts, and a grandmother) in housing projects throughout Hartford, Connecticut and received his B.A. in English Literature from Brooklyn College.

He is the author of two chapbooks: No (YesYes Books, 2013) and Burnings (Sibling Rivalry Press, 2010), which was an American Library Association’s Over The Rainbow selection and has been taught widely in universities, both in America and abroad. A recipient of a 2013 Pushcart Prize, other honors include fellowships from Kundiman, Poets House, and the Saltonstall Foundation For the Arts, as well as an Academy of American Poets Prize and the Connecticut Poetry Society’s Al Savard Award. Poems appear in Denver Quarterly, Quarterly West, Passages North, Guernica, The Normal School, Beloit Poetry Journal, Crab Orchard Review, Best of the Net 2012 and the American Poetry Review, which awarded him the 2012 Stanley Kunitz Prize. Work has also been translated into Hindi, Korean, Vietnamese, and Russian.