A World Without Homosexuals… 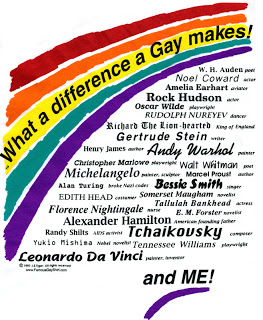 I have been thinking this month especially about all of the contributions of gay, lesbian, bisexual and transgender people.  A thought occurred to me, can I even imagine what the world would be like if there had never been any homosexuals?

Without Alexander the Great, Hellenistic culture would not have been spread from India to Egypt. The Italian Renaissance would have been non-existent without those who created the art and architecture of the Renaissance, the vast majority of whom were gay or bisexual. Leonardo Da Vinci, Michelangelo, Caravaggio, Socrates, Aristotle, and Alexander the Great are also reputed to be gay by some historians. Think what would have been lost in the world of philosophy and art if they hadn’t existed.

The United States, Britain, and the other Allies might have lost World War II because Alan Turing, a gay British mathematician, would never have been born. Turing broke one of the Nazis’ most important codes to help shorten the war. African-Americans might have struggled longer before receiving civil rights because there would have been no Bayard Rustin, the gay man who organized the 1963 March on Washington. This the march where Dr. Martin Luther King, Jr., made his famous “I Have a Dream” speech.

Our musical world would have been impoverished because gay American composer Aaron Copeland would have never been born. Russian composer Peter Ilyich Tchaikovsky would not have existed, neither would have Leonard Bernstein, English composer Benjamin Britten, or singers Bessie Smith, Melissa Etheridge, or Elton John. Katherine Bates would have never written “America the Beautiful.” We would have also missed the folk songs of Stephen Foster or the clever compositions of Cole Porter.

Do you like the plays Our Town, The Glass Menagerie, A Streetcar Named Desire, Cat on a Hot Tin Roof, Who’s Afraid of Virginia Woolf, The Importance of Being Earnest, and Breakfast at Tiffany’s? None of these would have been written. Their authors were all gay.

At times it seems as if some people would prefer a world where no lesbians or gays existed. But what would that world really look like? Above is just a small look at what the world might have been like if it had never included people who were homosexual or had a significant homosexual relationship in life. It would be difficult to envision or recognize a civilized world without the contributions of gays and lesbians.  It would no doubt be a bleak and boring place devoid of much of the art, architecture, philosophy, and much of the wonderful heritage of humanity.  None of the above even begins to include fashion and beauty, what an ugly world we would live in.

I began my life in the South and for five years lived as a closeted teacher, but am now making a new life for myself as an oral historian in New England. I think my life will work out the way it was always meant to be. That doesn't mean there won't be ups and downs; that's all part of life. It means I just have to be patient. I feel like October 7, 2015 is my new birthday. It's a beginning filled with great hope. It's a second chance to live my life…not anyone else's. My profile picture is "David and Me," 2001 painting by artist Steve Walker. It happens to be one of my favorite modern gay art pieces. END_OF_DOCUMENT_TOKEN_TO_BE_REPLACED
This entry was posted on Sunday, October 16th, 2011 at 1:28 pm and posted in Gay Icon, History. You can follow any responses to this entry through the RSS 2.0 feed.
« Moment of Zen: Meditation
LGBT History Month Icons Oct. 15th – 18th »

6 responses to “A World Without Homosexuals…”