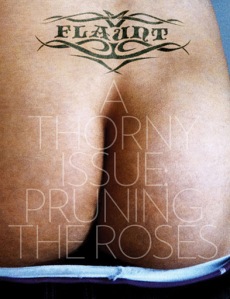 James Franco continues to be one of the most unusual, unpredictable and random A-list actors in Hollywood. From producing gay-themed art films and starring in a music video with Kalup Linzy to enrolling in something like 100 college graduate courses, the guy is not only a creative energizer bunny, but an odd one at that. 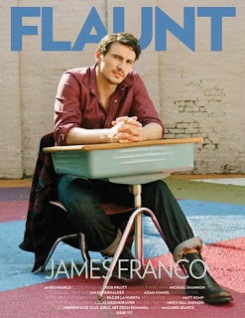 Franco’s latest uncharted turn is both shocking and not-so-shocking, considering the era we live in. The shocking part is that a recent Oscar-nominee would agree to have a close up photo of his naked bum grace the cover of Flaunt, the Los Angeles-based fashion magazine. That’s right kids; you can go out and purchase a close to life-size photo of Franco’s sweet cheeks, ready for framing or sleeping with under your pillow. The not-so-shocking part is that we live in a world where we’ve seen paparazzi photos of Britney and Lindsay’s naughty bits and sex tapes of Kim Kardarshian, Paris Hilton, Eric Dane and more. At this point in time, a 2-D picture of an actor’s butt seems almost…well, family friendly.

I began my life in the South and for five years lived as a closeted teacher, but am now making a new life for myself as an oral historian in New England. I think my life will work out the way it was always meant to be. That doesn't mean there won't be ups and downs; that's all part of life. It means I just have to be patient. I feel like October 7, 2015 is my new birthday. It's a beginning filled with great hope. It's a second chance to live my life…not anyone else's. My profile picture is "David and Me," 2001 painting by artist Steve Walker. It happens to be one of my favorite modern gay art pieces. END_OF_DOCUMENT_TOKEN_TO_BE_REPLACED
This entry was posted on Saturday, October 29th, 2011 at 7:56 am and posted in Moment of Zen, Nudity. You can follow any responses to this entry through the RSS 2.0 feed.
« LGBT History Month Icons Oct. 26th – 28th
13 Gayest Halloween Movies Ever »

3 responses to “Moment of Zen: Flaunt”