The Pumpkin by John Greenleaf Whittier

The Pumpkin
by John Greenleaf Whittier 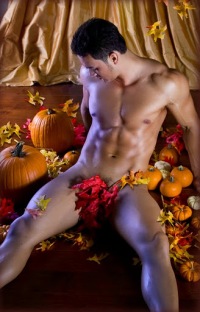 Oh, greenly and fair in the lands of the sun,
The vines of the gourd and the rich melon run,
And the rock and the tree and the cottage enfold,
With broad leaves all greenness and blossoms all gold,
Like that which o’er Nineveh’s prophet once grew,
While he waited to know that his warning was true,
And longed for the storm-cloud, and listened in vain
For the rush of the whirlwind and red fire-rain.

On the banks of the Xenil the dark Spanish maiden
Comes up with the fruit of the tangled vine laden;
And the Creole of Cuba laughs out to behold
Through orange-leaves shining the broad spheres of gold;
Yet with dearer delight from his home in the North,
On the fields of his harvest the Yankee looks forth,
Where crook-necks are coiling and yellow fruit shines,
And the sun of September melts down on his vines. 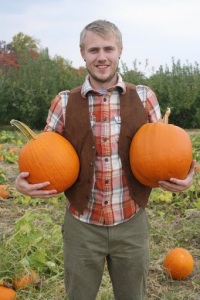 Ah! on Thanksgiving day, when from East and from West,
From North and from South comes the pilgrim and guest;
When the gray-haired New Englander sees round his board
The old broken links of affection restored,
When the care-wearied man seeks his mother once more,
And the worn matron smiles where the girl smiled before,
What moistens the lip and what brightens the eye?
What calls back the past, like the rich Pumpkin pie?

Oh, fruit loved of boyhood! the old days recalling,
When wood-grapes were purpling and brown nuts were falling!
When wild, ugly faces we carved in its skin,
Glaring out through the dark with a candle within!
When we laughed round the corn-heap, with hearts all in tune,
Our chair a broad pumpkin,—our lantern the moon,
Telling tales of the fairy who travelled like steam
In a pumpkin-shell coach, with two rats for her team!

Then thanks for thy present! none sweeter or better
E’er smoked from an oven or circled a platter!
Fairer hands never wrought at a pastry more fine,
Brighter eyes never watched o’er its baking, than thine!
And the prayer, which my mouth is too full to express,
Swells my heart that thy shadow may never be less,
That the days of thy lot may be lengthened below,
And the fame of thy worth like a pumpkin-vine grow,
And thy life be as sweet, and its last sunset sky
Golden-tinted and fair as thy own Pumpkin pie!

In the poem “The Pumpkin” by 19th century poet John Greenleaf Whittier, the tradition of Thanksgiving is described as a time of remembrance and return, a celebration of abundance, both of sustenance and of love, at a family gathering. The poet depicts the scene sensually, packing each line with the fruits of a healthy harvest and the warmth of a kitchen sweet from baking. By the end of the poem, the words achieve an almost too-full splendor:

And the prayer, which my mouth is too full to express,
Swells my heart that thy shadow may never be less,
That the days of thy lot may be lengthened below,
And the fame of thy worth like a pumpkin-vine grow…

Having lived on a farm his entire life, Whittier offers his reader the plentiful harvest as a symbol of a productive year, evoking the historical origin of Thanksgiving as the meal held in 1621 by the Wampanoag together with the Pilgrims who settled in Plymouth, Massachusetts; the harvest festival was a shared tradition of both cultures, and the account of a peaceful celebration between the two groups is still the basis for the holiday today. While some of the elements of the story are myths that were consciously exaggerated in the 1890s and early 1900s in the hopes of forging a national identity in the aftermath of the Civil War, the core message of acceptance and commonality still remains for many celebrants.

I began my life in the South and for five years lived as a closeted teacher, but am now making a new life for myself as an oral historian in New England. I think my life will work out the way it was always meant to be. That doesn't mean there won't be ups and downs; that's all part of life. It means I just have to be patient. I feel like October 7, 2015 is my new birthday. It's a beginning filled with great hope. It's a second chance to live my life…not anyone else's. My profile picture is "David and Me," 2001 painting by artist Steve Walker. It happens to be one of my favorite modern gay art pieces. END_OF_DOCUMENT_TOKEN_TO_BE_REPLACED
This entry was posted on Tuesday, November 22nd, 2011 at 8:44 am and posted in Inspiration, Nudity, Poetry. You can follow any responses to this entry through the RSS 2.0 feed.
« What I Am Thankful For…
The American Gay Rights Movement: A Timeline To Be Thankful For »

4 responses to “The Pumpkin by John Greenleaf Whittier”