The American Gay Rights Movement: A Timeline To Be Thankful For 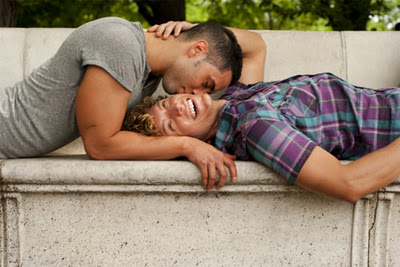 This timeline provides information about the gay rights movement in the United States from 1924 to the present: including the Stonewall riots; the contributions of Harvey Milk; the “Don’t Ask, Don’t Tell” policy; the first civil unions; the legalization of same-sex marriage in Massachusetts, Connecticut, New York; and more.

1948
Alfred Kinsey publishes Sexual Behavior in the Human Male, revealing to the public that homosexuality is far more widespread than was commonly believed.

1951
The Mattachine Society, the first national gay rights organization, is formed by Harry Hay, considered by many to be the founder of the gay rights movement.

1956
The Daughters of Bilitis, a pioneering national lesbian organization, is founded.

1962
Illinois becomes the first state in the U.S. to decriminalize homosexual acts between consenting adults in private. 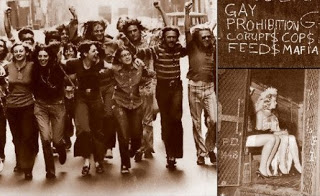 1969
The Stonewall riots transform the gay rights movement from one limited to a small number of activists into a widespread protest for equal rights and acceptance. Patrons of a gay bar in New York’s Greenwich Village, the Stonewall Inn, fight back during a police raid on June 27, sparking three days of riots.

1973
The American Psychiatric Association removes homosexuality from its official list of mental disorders.

Harvey Milk runs for city supervisor in San Francisco. He runs on a socially liberal platform and opposes government involvement in personal sexual matters. Milk comes in 10th out of 32 candidates, earning 16,900 votes, winning the Castro District and other liberal neighborhoods. He receives a lot of media attention for his passionate speeches, brave political stance, and media skills.

1976
San Francisco Mayor George Moscone appoints Harvey Milk to the Board of Permit Appeals, making Milk the first openly gay city commissioner in the United States. Milk decides to run for the California State Assembly and Moscone is forced to fire him from the Board of Permit Appeals after just five weeks. Milk loses the State Assembly race by fewer than 4,000 votes. Believing the Alice B. Toklas LGBT Democratic Club will never support him politically, Milk co-founds the San Francisco Gay Democratic Club after his election loss.

On January 8, Harvey Milk makes national news when he is sworn in as a member of the San Francisco Board of Supervisors. Running against 16 other candidates, he wins the election by 30 percent. Milk begins his term by sponsoring a civil rights bill that outlaws sexual orientation discrimination. Only one supervisor votes against it and Mayor Moscone signs it into law.
John Briggs drops out of the California governor’s race, but receives support for Proposition 6, also known as the Briggs Initiative, a proposal to fire any teacher or school employee who publicly supports gay rights. Harvey Milk campaigns against the bill and attends every event hosted by Briggs. In the summer, attendance greatly increases at Gay Pride marches in San Francisco and Los Angeles, partly in response to Briggs. President Jimmy Carter, former Governor Ronald Reagan, and Governor Jerry Brown speak out against the proposition. On November 7, voters reject the proposition by more than a million votes.

1982
Wisconsin becomes the first state to outlaw discrimination on the basis of sexual orientation.

1993
The “Don’t Ask, Don’t Tell” policy is instituted for the U.S. military, permitting gays to serve in the military but banning homosexual activity. President Clinton’s original intention to revoke the prohibition against gays in the military was met with stiff opposition; this compromise, which has led to the discharge of thousands of men and women in the armed forces, was the result.

1996
In Romer v. Evans, the Supreme Court strikes down Colorado’s Amendment 2, which denied gays and lesbians protections against discrimination, calling them “special rights.” According to Justice Anthony Kennedy, “We find nothing special in the protections Amendment 2 withholds. These protections . . . constitute ordinary civil life in a free society.”

2000
Vermont becomes the first state in the country to legally recognize civil unions between gay or lesbian couples. The law states that these “couples would be entitled to the same benefits, privileges, and responsibilities as spouses.” It stops short of referring to same-sex unions as marriage, which the state defines as heterosexual. 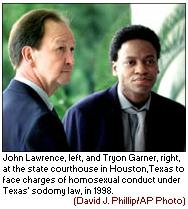 2003
The U.S. Supreme Court rules in Lawrence v. Texas that sodomy laws in the U.S. are unconstitutional. Justice Anthony Kennedy wrote, “Liberty presumes an autonomy of self that includes freedom of thought, belief, expression, and certain intimate conduct.”
In November, the Massachusetts Supreme Judicial Court ruled that barring gays and lesbians from marrying violates the state constitution. The Massachusetts Chief Justice concluded that to “deny the protections, benefits, and obligations conferred by civil marriage” to gay couples was unconstitutional because it denied “the dignity and equality of all individuals” and made them “second-class citizens.” Strong opposition followed the ruling.

2004
On May 17, same-sex marriages become legal in Massachusetts.

2007
In November, the House of Representatives approves a bill ensuring equal rights in the workplace for gay men, lesbians, and bisexuals. 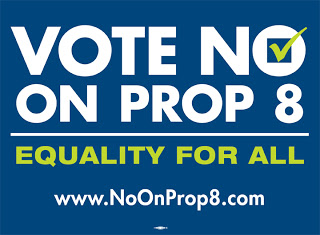 2009
On April 3, the Iowa Supreme Court unanimously rejects the state law banning same-sex marriage. Twenty-one days later, county recorders are required to issue marriage licenses to same-sex couples.
On April 7, the Vermont Legislature votes to override Gov. Jim Douglas’s veto of a bill allowing gays and lesbians to marry, legalizing same-sex marriage. It is the first state to legalize gay marriage through the legislature; the courts of the other states in which the marriage is legal—Massachusetts, Connecticut, and Iowa—gave approval.
On June 3, New Hampshire governor John Lynch signs legislation allowing same-sex marriage. The law stipulates that religious organizations and their employees will not be required to participate in the ceremonies. New Hampshire is the sixth state in the nation to allow same-sex marriage.
On June 17, President Obama signs a referendum allowing the same-sex partners of federal employees to receive benefits. They will not be allowed full health coverage, however. This is Obama’s first major initiative in his campaign promise to improve gay rights.
On August 12, President Obama posthumously awards Harvey Milk the Presidential Medal of Freedom.

2010
March 3, Congress approves a law signed in December 2009 that legalizes same-sex marriage in the District of Columbia.
August 4, Chief U.S. District Judge Vaughn Walker ruled that Proposition 8, the 2008 referendum that banned same-sex marriage in California, violates the 14th Amendment’s equal protection clause. “Proposition 8 singles out gays and lesbians and legitimates their unequal treatment,” Vaughn wrote in his opinion. “Proposition 8 perpetuates the stereotype that gays and lesbians are incapable of forming long-term loving relationships and that gays and lesbians are not good parents.”
December 18, the U.S. Senate voted 65 to 31 in favor of repealing Don’t Ask, Don’t Tell, the Clinton-era military policy that forbids openly gay men and women from serving in the military. Eight Republicans sided with the Democrats to strike down the ban. The ban will not be lifted officially until President Obama, Defense Secretary Robert Gates, and Admiral Mike Mullen, the chairman of the Joint Chiefs of Staff, agree that the military is ready to enact the change and that it won’t affect military readiness. On Dec. 18, President Obama officially repealed the “Don’t Ask, Don’t Tell” military policy. 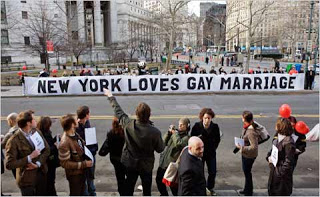 2011
June 24, New York passes a law to allow same-sex marriage. New York is now the largest state that allows gay and lesbian couples to marry. The vote comes on the eve of the city’s annual Gay Pride Parade and gives new momentum to the national gay-rights movement. The marriage bill is approved with a 33 to 29 vote. Cheering supporters greet Gov. Andrew Cuomo as he arrives on the Senate floor to sign the measure at 11:55pm, just moments after the vote. After making same-sax marriage one of his top priorities, Cuomo emerges as a true champion of gay rights.

I began my life in the South and for five years lived as a closeted teacher, but am now making a new life for myself as an oral historian in New England. I think my life will work out the way it was always meant to be. That doesn't mean there won't be ups and downs; that's all part of life. It means I just have to be patient. I feel like October 7, 2015 is my new birthday. It's a beginning filled with great hope. It's a second chance to live my life…not anyone else's. My profile picture is "David and Me," 2001 painting by artist Steve Walker. It happens to be one of my favorite modern gay art pieces. END_OF_DOCUMENT_TOKEN_TO_BE_REPLACED
This entry was posted on Wednesday, November 23rd, 2011 at 8:11 am and posted in History. You can follow any responses to this entry through the RSS 2.0 feed.
« The Pumpkin by John Greenleaf Whittier
Happy Thanksgiving »

3 responses to “The American Gay Rights Movement: A Timeline To Be Thankful For”