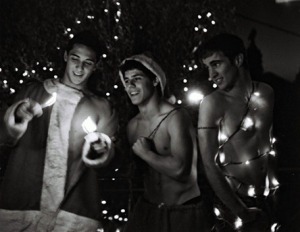 I have to admit, that Christmas Eve in my household growing up was never an especially fun time.  We did not go to to church on Christmas Eve or Christmas Day (unless Sunday fell on one of these days) because as members of the church of Christ, it is not considered a religious holiday, since there is no mention of an actual date for Christmas in the New Testament.  We rarely even sang Christmas songs; the only exceptions being when I used to lead the singing.  The only thing that signified Christmas in our church was the poinsettias that were placed in the church.

The reason for Christmas Even not being especially fun was because we had to go to my maternal grandparent’s house for Christmas Eve, and then as soon as we opened gifts we had to go to my paternal grandmother’s family Christmas party.  My father was always ill-tempered because we would always arrive late to the second party and he blamed it all on my mother.  This made for a really uncomfortable ride between the two parties.  My father hates being late, and sees another Christmas party as not a good excuse.  My father could be a real jackass at times, and every Christmas Eve we had to hear him bitch and complain.  Then as soon as we got home from the second party, it was off to bed, so that “Santa Claus” could come. I always hated trying to fall asleep on Christmas Eve.  Even on a good night, I have never been one to simply lay my head down and go to sleep, and with the anticipation of Christmas morning, Christmas Eve night was never an easy night to go to sleep, but I always did, and never once heard my parents (yes, contrary to yesterday’s post, I knew it was them) putting the presents under the tree.

However, there was one thing that I loved about Christmas Eve. It was the night that Santa Claus would be coming to visit.  I have always loved Clement C. Moore’s A Visit from St. Nicholas, and so I wanted to share it with you for my Christmas Eve post.


A Visit from St. Nicholas
by Clement Clark Moore

‘Twas the night before Christmas, when all through the house
Not a creature was stirring, not even a mouse;
The stockings were hung by the chimney with care,
In hopes that St. Nicholas soon would be there;
The children were nestled all snug in their beds,
While visions of sugar-plums danced in their heads;
And mamma in her ’kerchief, and I in my cap,
Had just settled our brains for a long winter’s nap,
When out on the lawn there arose such a clatter,
I sprang from the bed to see what was the matter.
Away to the window I flew like a flash,
Tore open the shutters and threw up the sash.
The moon on the breast of the new-fallen snow
Gave the lustre of mid-day to objects below,
When, what to my wondering eyes should appear,
But a miniature sleigh, and eight tiny reindeer,
With a little old driver, so lively and quick,
I knew in a moment it must be St. Nick.
More rapid than eagles his coursers they came,
And he whistled, and shouted, and called them by name;

“Now, Dasher! now, Dancer! now, Prancer and Vixen!
On, Comet! on, Cupid! on, Donder and Blitzen!
To the top of the porch! to the top of the wall!
Now dash away! dash away! dash away all!”
As dry leaves that before the wild hurricane fly,
When they meet with an obstacle, mount to the sky;
So up to the house-top the coursers they flew,
With the sleigh full of Toys, and St. Nicholas too.
And then, in a twinkling, I heard on the roof
The prancing and pawing of each little hoof.
As I drew in my head, and was turning around,
Down the chimney St. Nicholas came with a bound.
He was dressed all in fur, from his head to his foot,
And his clothes were all tarnished with ashes and soot;
A bundle of Toys he had flung on his back,
And he looked like a pedler just opening his pack.
His eyes—how they twinkled! his dimples how merry!
His cheeks were like roses, his nose like a cherry!
His droll little mouth was drawn up like a bow
And the beard of his chin was as white as the snow;
The stump of a pipe he held tight in his teeth,

And the smoke it encircled his head like a wreath;
He had a broad face and a little round belly,
That shook when he laughed, like a bowlful of jelly.
He was chubby and plump, a right jolly old elf,
And I laughed when I saw him, in spite of myself;
A wink of his eye and a twist of his head,
Soon gave me to know I had nothing to dread;
He spoke not a word, but went straight to his work,
And filled all the stockings; then turned with a jerk,
And laying his finger aside of his nose,
And giving a nod, up the chimney he rose;
He sprang to his sleigh, to his team gave a whistle,
And away they all flew like the down of a thistle,
But I heard him exclaim, ere he drove out of sight,
“Happy Christmas to all, and to all a good-night.”

By the way, did you know that A Visit from St. Nicholas was not the only poem that Moore wrote about Santa Claus.  He wrote another one, that I had never read until recently called Old Santeclaus.  I hope that you enjoy it as well. 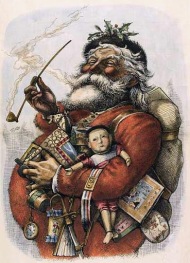 Old Santeclaus with much delight
His reindeer drives this frosty night,
O’er chimney-tops, and tracks of snow,
To bring his yearly gifts to you.


The steady friend of virtuous youth,
The friend of duty, and of truth,
Each Christmas eve he joys to come
Where love and peace have made their home.


Through many houses he has been,
And various beds and stockings seen;
Some, white as snow, and neatly mended,
Others, that seemed for pigs intended.


Where e’er I found good girls or boys,
That hated quarrels, strife and noise,
I left an apple, or a tart,
Or wooden gun, or painted cart.


To some I gave a pretty doll,
To some a peg-top, or a ball;
No crackers, cannons, squibs, or rockets,
To blow their eyes up, or their pockets.


No drums to stun their Mother’s ear,
Nor swords to make their sisters fear;
But pretty books to store their mind
With knowledge of each various kind.


But where I found the children naughty,
In manners rude, in temper haughty,
Thankless to parents, liars, swearers,
Boxers, or cheats, or base tale-bearers,


I left a long, black, birchen rod,
Such as the dread command of God
Directs a Parent’s hand to use

When virtue’s path his sons refuse.

I began my life in the South and for five years lived as a closeted teacher, but am now making a new life for myself as an oral historian in New England. I think my life will work out the way it was always meant to be. That doesn't mean there won't be ups and downs; that's all part of life. It means I just have to be patient. I feel like October 7, 2015 is my new birthday. It's a beginning filled with great hope. It's a second chance to live my life…not anyone else's. My profile picture is "David and Me," 2001 painting by artist Steve Walker. It happens to be one of my favorite modern gay art pieces. END_OF_DOCUMENT_TOKEN_TO_BE_REPLACED
This entry was posted on Saturday, December 24th, 2011 at 8:02 am and posted in Miscellaneous. You can follow any responses to this entry through the RSS 2.0 feed.
« Tradition #1: Santa Claus
Tradition #3: Merry Christmas »