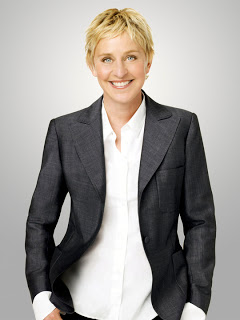 Ellen senses a kindred spirit in herself when she meets an openly gay woman, named Susan, through Richard, an old boyfriend of hers, who enlightens Ellen to her own sexual identity. Confused by this startling self-discovery, Ellen seeks the guidance of yet another therapist and braces herself for yet another moment of truth of her life.

After a discussion with her therapist, Ellen decides to tell the truth about her true repressed sexual orientation to her friends by inviting them over to her apartment to break the news so she can be at peace. Meanwhile, Ellen’s hopes for a relationship with Susan are dashed when she tells Ellen that she’s not interested, but gives Ellen further confidence to embrace her newfound life.
Fifteen years ago today, Ellen DeGeneres’s character Ellen Morgan came out of the closet while 42 million Americans watched.  During the fourth season of Ellen in 1997, DeGeneres came out publicly as a lesbian in an appearance on The Oprah Winfrey Show.  Shortly afterwards on the April 30, 1997, episode of Ellen title “The Puppy Episode,” her character Ellen Morgan also came out to a therapist played by Winfrey, and the series went on to explore various LGBT issues including the coming out process.
Thank you Ellen for an inspirational fifteen years.

I began my life in the South and for five years lived as a closeted teacher, but am now making a new life for myself as an oral historian in New England. I think my life will work out the way it was always meant to be. That doesn't mean there won't be ups and downs; that's all part of life. It means I just have to be patient. I feel like October 7, 2015 is my new birthday. It's a beginning filled with great hope. It's a second chance to live my life…not anyone else's. My profile picture is "David and Me," 2001 painting by artist Steve Walker. It happens to be one of my favorite modern gay art pieces. END_OF_DOCUMENT_TOKEN_TO_BE_REPLACED
This entry was posted on Monday, April 30th, 2012 at 7:00 am and posted in Uncategorized. You can follow any responses to this entry through the RSS 2.0 feed.
« When Jesus Met Homeless LGBT Youth
April Showers, Bring May Flowers »

One response to “The Puppy Episode”