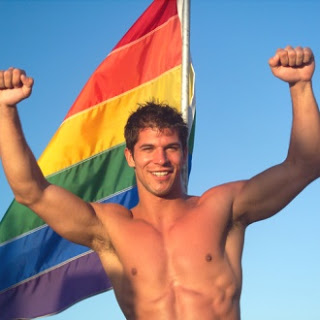 I received quite a number of comments about my post “Obama and Gay Marriage” on Monday. Instead of answering on that post, I thought I would do another post responding to the comments. First of all, thank you to all who left comments, I always enjoy hearing your opinions. Second, similar to what Fan of Casey said about living in a solid blue state, where no matter how he votes, his state will vote Democrat, I live in a solid red state, and no matter who I vote for, the Republican candidate will win in my state. However, that doesn’t mean that I will like it or follow the trend.

Queer Heaven, I agree with you that if Romney wins, we will most likely lose some of our gains in gay rights. Will, I’m not for sure he will reinstate DADT or that a gay marriage amendment will ever be viable, but he most likely will issue an executive order denying LGBT families from having full visitation rights in hospitals, which would reverse one of Obama’s most important executive orders.

“.” I tend to vote for Democrats also because they hold my beliefs more so than Republicans, but to be honest, I think both political parties are moving further away from the middle and is being controlled more and more by the extremes in the party. I am very much a moderate on most issues, and it is sad to me when someone like Romney is considered a moderate because he leans to the right for his base support. We desperately need someone in this country who will look out for the middle class and for the moderate voters. Elections are getting too extreme and the center is not represented anymore.

Jay, in many ways we are very much alike politically, though I do tend to think there should be more control of guns, though to a certain extent gun rights are important. I have a few guns that are family heirlooms, and I will never let anyone take them from me. However, like you, I am a bit of a mixed bag, which is why I consider myself a moderate.

Drew, I think that Romney is pandering to the right, but I’m not sure how moderate he can actually become if elected. He will still want to be elected again and he can do a lot of damage in four years. Presidents tend to become moderate only after winning a second term. Romney is a Mormon, which makes it ever more likely that he will stay far to the right. Mormons are nice people personally, but I do not agree with their political beliefs.

Fan of Casey, you are absolutely right that Obama promised the world, and he is seen as less than a success because he could not deliver. That’s why I would like to see a politician who is a realist. If you had a candidate that was as good of a speaker as Reagan or Obama who could point out the real problems and how he wants to go about fixing them, then we might have a candidate that we could follow.

Uncutplus, the only possible hope for the economy is for someone to give us realistic hope. FDR gave confidence to America, but it was Keynesian economics and WWII that brought us out of the Depression. I don’t know what the solution will be this time, but we have to have confidence first, or we will never pull ourselves out of it. I don’t see either candidates supplying that confidence.

Uncutplus, Drew, and Fan of Casey, As I said before, I think what we need to do is more than get the Republicans out of Congress, we need to get a healthy number of Democrats out as well. We need to get people in Congress who will work with each other. Right now, the atmosphere is so bipartisan that very little gets done. I feel that neither the Democrats or the Republicans represent the majority of the people anymore, but we do not have a viable choice otherwise and we vote for the lesser of the two evils.

I began my life in the South and for five years lived as a closeted teacher, but am now making a new life for myself as an oral historian in New England. I think my life will work out the way it was always meant to be. That doesn't mean there won't be ups and downs; that's all part of life. It means I just have to be patient. I feel like October 7, 2015 is my new birthday. It's a beginning filled with great hope. It's a second chance to live my life…not anyone else's. My profile picture is "David and Me," 2001 painting by artist Steve Walker. It happens to be one of my favorite modern gay art pieces. END_OF_DOCUMENT_TOKEN_TO_BE_REPLACED
This entry was posted on Wednesday, May 23rd, 2012 at 7:00 am and posted in Politics. You can follow any responses to this entry through the RSS 2.0 feed.
« School’s Out by WH Davies
Exciting News: Jim Parsons Comes Out! »

3 responses to “A Response”