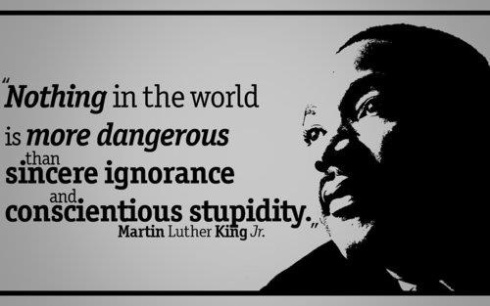 Yesterday was the 50th anniversary of the March on Washington, so I felt that the above image was perfect to go along with the news story in this post.

A North Carolina-based mother is facing misdemeanor child abuse charges after she allegedly instructed her 12-year-old son to “beat the gay away” from his older brother, 15.

As local news outlet WECT TV6 reports, Whiteville police were summoned to the home of Mary Gowans on Aug. 24. When they arrived, there were “several people yelling and screaming,” according to a police report cited in the report.

Gowans is alleged to have made her 15-year-old son strip down to his underpants while instructing his younger brother to strike him repeatedly with a belt, according to WITN. Gowans, however, denies those charges, even though she told reporters that her younger son did hit his older sibling, but that the older had hit the younger one first.

Gowans also told reporters that she believes her older son is gay “in some way,” and that he has been visiting an older gay man who she heard had molested him. She said she tried to contact authorities with regard to the alleged sexual abuse, but nothing has yet been done.

Last year, a pastor in Fayetteville, N.C. sparked controversy after he urged his congregation to attack their children if they appear to be exhibiting behavior outside of gender norms, Good as You’s Jeremy Hooper first reported.

Sean Harris, senior pastor of Fayetteville’s Berean Baptist Church, later said he “would never ever advocate” hitting a child, but nonetheless defended his belief in the need to reinforce traditional gender roles in children.

I began my life in the South and for five years lived as a closeted teacher, but am now making a new life for myself as an oral historian in New England. I think my life will work out the way it was always meant to be. That doesn't mean there won't be ups and downs; that's all part of life. It means I just have to be patient. I feel like October 7, 2015 is my new birthday. It's a beginning filled with great hope. It's a second chance to live my life…not anyone else's. My profile picture is "David and Me," 2001 painting by artist Steve Walker. It happens to be one of my favorite modern gay art pieces. END_OF_DOCUMENT_TOKEN_TO_BE_REPLACED
This entry was posted on Thursday, August 29th, 2013 at 7:00 am and tagged with Baptist, Child abuse, Gay, Mary Gowans, North Carolina, Sean Harris, WECT, Whiteville North Carolina and posted in News. You can follow any responses to this entry through the RSS 2.0 feed.
« Ignorance
A Friday Funny »