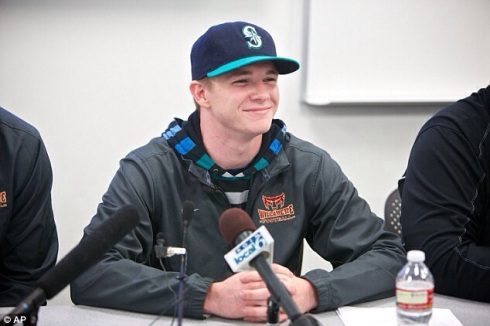 A kicker for Oregon’s Willamette University became the first active college football player to come out publicly when he announced to his team — and the world — that he is bisexual.

Conner Mertens came out to his coach and to his teammates, and then to the world, this month after years of keeping his identity a secret. In a profile for Out Sports, Mertens described how he felt a youngster growing up in a conservative town.

“For me growing up, I always felt the biggest thing that caused my depression was the feeling of being alone,” he said. “I hate the stereotypes that go along with liking the same sex. You don’t have to follow the stereotype to be this way. I made the decision that if I could help anyone else avoid feeling the way I felt, I would.”

While coming out might have been daunting, Mertens received nothing but love and support from his team.

“Coach didn’t blink an eye,” he told Out Sports. “He talked about how they don’t build football players at Willamette, they build men, and that he was proud that I could tell him this about myself.”

After coming out to those close to him, Mertens came out to world. He posted a letter to Twitter about his decision.

“I finally love the person I see in the mirror for the first time in my life,” he wrote, in part. “Unless you have had to fight for a life that felt real and honest and normal against all odds you may not understand the importance of being able to be… you.” 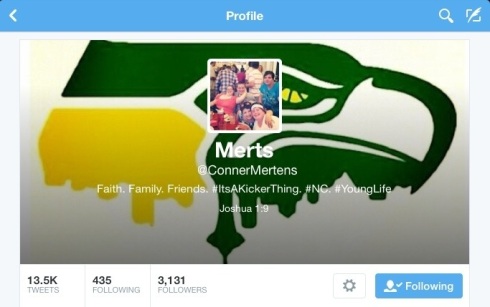 Mertens came out to his family around Christmastime and was humbled by the response.

“It sounds corny, but I legitimately feel there’s a weight off my shoulders,” he told the press, per ESPN. “It’s tiring to pretend your something else for 24-7, for 18 or 19 years of your life. So finally to be able to joke about it, to be honest about it, not have to put on this mask, I’m finally able to take a deep breath.”

The 19-year-old told the Oregonian he likes and has dated women but is currently in a relationship with a man from Portland who goes to school in Washington. 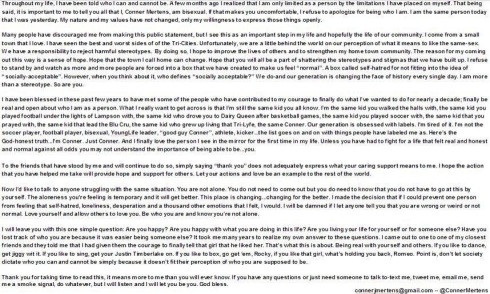 I began my life in the South and for five years lived as a closeted teacher, but am now making a new life for myself as an oral historian in New England. I think my life will work out the way it was always meant to be. That doesn't mean there won't be ups and downs; that's all part of life. It means I just have to be patient. I feel like October 7, 2015 is my new birthday. It's a beginning filled with great hope. It's a second chance to live my life…not anyone else's. My profile picture is "David and Me," 2001 painting by artist Steve Walker. It happens to be one of my favorite modern gay art pieces. END_OF_DOCUMENT_TOKEN_TO_BE_REPLACED
This entry was posted on Friday, January 31st, 2014 at 7:00 am and posted in Coming Out. You can follow any responses to this entry through the RSS 2.0 feed.
« Birmingham’s Good Samaritan
Moment of Zen: The Year of the Horse »