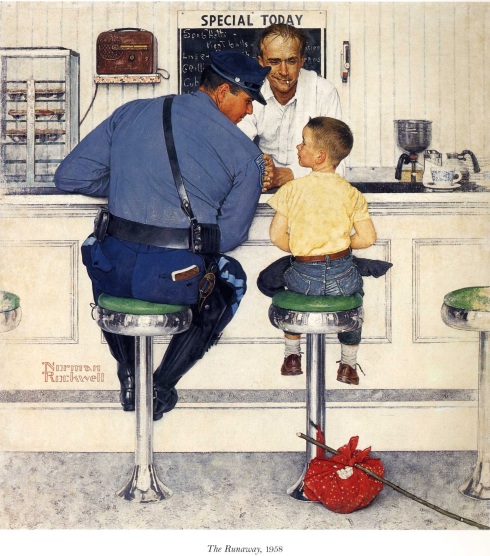 Without thinking too much about it in specific terms, I was showing the America I knew and observed to others who might not have noticed.
—Norman Rockwell

Born in New York City in 1894, Norman Rockwell always wanted to be an artist. Rockwell found success early. He painted his first commission of four Christmas cards before his sixteenth birthday. While still in his teens, he was hired as art director of Boys’ Life, the official publication of the Boy Scouts of America, and began a successful freelance career illustrating a variety of young people’s publications.

At age 21, Rockwell’s family moved to New Rochelle, New York, where Rockwell set up a studio with the cartoonist Clyde Forsythe and produced work for such magazines as Life, Literary Digest, and Country Gentleman. In 1916, the 22-year-old Rockwell painted his first cover for The Saturday Evening Post, the magazine considered by Rockwell to be the “greatest show window in America.” Over the next 47 years, another 321 Rockwell covers would appear on the cover of the Post. Also in 1916, Rockwell married Irene O’Connor; they divorced in 1930.

The 1930s and 1940s are generally considered to be the most fruitful decades of Rockwell’s career. In 1930 he married Mary Barstow, a schoolteacher, and the couple had three sons, Jarvis, Thomas, and Peter. The family moved to Arlington, Vermont, in 1939, and Rockwell’s work began to reflect small-town American life.

In 1943, inspired by President Franklin Roosevelt’s address to Congress, Rockwell painted the Four Freedoms paintings. They were reproduced in four consecutive issues of The Saturday Evening Post with essays by contemporary writers. Rockwell’s interpretations of Freedom of Speech, Freedom to Worship, Freedom from Want, and Freedom from Fear proved to be enormously popular. The works toured the United States in an exhibition that was jointly sponsored by the Post and the U.S. Treasury Department and, through the sale of war bonds, raised more than $130 million for the war effort.

Although the Four Freedoms series was a great success, 1943 also brought Rockwell an enormous loss. A fire destroyed his Arlington studio as well as numerous paintings and his collection of historical costumes and props.

In 1953, the Rockwell family moved from Arlington, Vermont, to Stockbridge, Massachusetts. Six years later, Mary Barstow Rockwell died unexpectedly. In collaboration with his son Thomas, Rockwell published his autobiography, My Adventures as an Illustrator, in 1960. The Saturday Evening Post carried excerpts from the best-selling book in eight consecutive issues, with Rockwell’s Triple Self-Portrait on the cover of the first.

In 1961, Rockwell married Molly Punderson, a retired teacher. Two years later, he ended his 47-year association with The Saturday Evening Post and began to work for Look magazine. During his 10-year association with Look, Rockwell painted pictures illustrating some of his deepest concerns and interests, including civil rights, America’s war on poverty, and the exploration of space.

So much has been written about Rockwell, including his own autobiography, that his life would seem to be a closed case. But he receives a fascinating rethinking in Deborah Solomon’s American Mirror: The Life and Art of Norman Rockwell, in which she makes a case for his homoerotic desires.

Although she can’t conclusively prove that Rockwell had sex with men, she makes an argument that he “demonstrated an intense need for emotional and physical closeness with men” and that his unhappy marriages were attempts at “passing” and “controlling his homoerotic desires.” Rockwell also had a close bond with the openly gay artist J.C. Leyendecker and his gay brother, Frank, also an artist, and counted himself as the “one true friend” the brothers had. As Solomon states, “it was both an artistic apprenticeship and an unclassifiable romantic crush.” According to Solomon, Rockwell went on to have close relationships with his studio assistants (even sleeping in the same bed with one on an extended camping trip) and created his own version of idealized boyhood beauty.

While digging into his back story, Solomon offers sensitive close readings of some of his well-known works that smack of homoeroticism but have been cherished (and sanitized) for their depiction of all-American values. For example, when she points out that in the beloved portrait of a young boy seated next to a police officer at a diner counter, “The Runaway,” the cop can be seen as a “figure of tantalizing masculinity, a muscle man in a skin-tight uniform and boots,” it’s almost as if we’re seeing a proto-Tom of Finland emerge before our eyes. In this analysis, it’s not only a painting that represents a desire for both independence and security, it shows the tenderness between men (of any age) and encapsulates the complicated life and desires of an artist many have written off as a proselytizer of an American dream that didn’t include them. According to Solomon, Rockwell was constantly yearning for another ideal, of youthful male beauty, that always seemed to lie beyond reach.

I’m all for taking a close look into history and uncovering evidence that a historical figure may have been gay; however, this is one instance where I tend to think that Solomon is making a bit of a stretch. I personally have never viewed Norman Rockwell’s work as homoerotic, but as idealistic Americana. I certainly see no traces of a Tom of Finland police officer in the doughy 1950s officer of “The Runaway.” I will admit that I have not read Deborah Solomon’s book nor have I had the chance to evaluate the evidence, but it seems like pure speculation to me. American Mirror has produced a fair amount of controversy, so I do not think I am alone in finding fault with Solomon’s assumptions.

In her new biography, however, Deborah Solomon presents a Rockwell we might not be inclined to love so much. Her most shocking claim is that he was sexually attracted to young boys. Almost equally shocking, but more subtle, is her suggestion that Rockwell’s self-absorption had a body count—his behavior led directly or indirectly to at least three ugly deaths.

There is no reason to go along with Solomon about these things. As I’ll show, her arguments—such as they are—are deeply flawed, and she has a pronounced tendency to either distort or ignore evidence to the contrary of her claims. As her interpretation of Rockwell himself is irremediably flawed, so is her interpretation of his art. Hers is a book without merit.

Her evidence for Rockwell’s pedophilia consists of three intertwined claims: First, he paints a lot of boys. Second, he forms strong relationships with some of the boys who serve as models for these paintings. Third, some of these paintings are sexually suggestive. Solomon thinks that pedophilia serves as the best unifying explanation for these claims. I doubt even that, but even if it were the case, there are problems with all three.

Toner’s review of American Mirror is quite long but interesting. From what I have read, it seems as if Solomon had a particular agenda, probably for publicity, in writing her Rockwell biography. It seems that sensationalism is what sells biographies these days, and Solomon has certainly written what seems to be a sensational book. The fact is, if Norman Rockwell was homosexual, there seems no way of proving it except through speculation. I doubt it would surprise many people if one of America’s greatest artists was gay, because let’s face it, most of history’s great artists were. However, I think Rockwell would have probably painted a new version of the picture below to answer the questions of his sexuality:

In “The Gossips,” a Saturday Evening Post cover from March 6, 1948, it seems Rockwell had a neighbor who started a disagreeable rumor about him. What can one do about a nasty gossip? Well, if you are a famous illustrator, you can paint a cover about it. It started with just a couple of people, then it just grew, leaving Rockwell in need of more models. The result, said the editors, is that we see “almost the entire adult population of Arlington, Vermont.” As he worked on the project, the artist worried that his friends and neighbors might be offended, so he included his wife and himself. Mary Rockwell is second and third in the third row, spreading the rumor via rotary phone. In the gray felt hat in the bottom row is, of course, the artist himself (you can click on the image for a close-up). You’ll notice the lady at the end is the one at the beginning who started the rumor, and our friend Rockwell appears to be giving her a piece of his mind. Apparently, the neighbor who started the rumor in real life never spoke to Rockwell again. I have a feeling it was no great loss.

I began my life in the South and for five years lived as a closeted teacher, but am now making a new life for myself as an oral historian in New England. I think my life will work out the way it was always meant to be. That doesn't mean there won't be ups and downs; that's all part of life. It means I just have to be patient. I feel like October 7, 2015 is my new birthday. It's a beginning filled with great hope. It's a second chance to live my life…not anyone else's. My profile picture is "David and Me," 2001 painting by artist Steve Walker. It happens to be one of my favorite modern gay art pieces. END_OF_DOCUMENT_TOKEN_TO_BE_REPLACED
This entry was posted on Monday, March 10th, 2014 at 7:00 am and posted in Art, Book Review, History. You can follow any responses to this entry through the RSS 2.0 feed.
« Health and Healing
Libido »

One response to “Was Norman Rockwell Gay?”