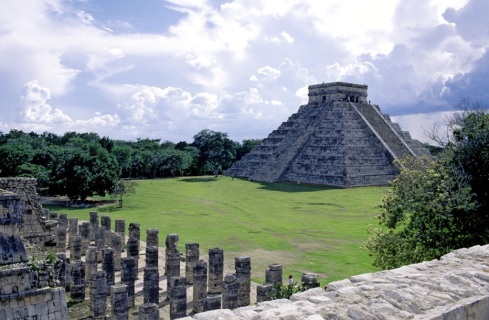 Today on my cruise we will be in the port of Progresso, Mexico. One of the excursions this day is to the ancient Mayan city of Chichen Itza, a place I have longed to visit and will be doing today. Chichen Itza was one of the largest Maya cities and it was likely to have been one of the mythical great cities, or Tollans, referred to in later Mesoamerican literature. The city may have had the most diverse population in the Maya world, a factor that could have contributed to the variety of architectural styles at the site.

The ruins of Chichen Itza are federal property, and the site’s stewardship is maintained by Mexico’s Instituto Nacional de Antropología e Historia (National Institute of Anthropology and History). The land under the monuments had been privately owned until 29 March 2010, when it was purchased by the state of Yucatán. Chichen Itza is one of the most visited archaeological sites in Mexico; an estimated 1.2 million tourists visit the ruins every year. My mother and I will make up two such guests today.

Mayan history and culture has always fascinated me for many reasons. One of those reasons is that historians who research pre-colonial Central American cultures have found evidence that homosexuality was considered acceptable by the Mayans. In fact, noble families would allow their sons to have relationships with other boys as a part of the process of growing up, ultimately leading up to their wives. According to “The Origin and Role of Same-Sex Relations in Human Societies,” some men continued to date men as they got older. Some scholars are suspicious of the claim that gay relationships were acceptable to the Mayans, pointing out that the source of much of this information is the Spanish conquerors, who may have had a vested interest in making these cultures seem backwards to those in Europe.

In his field work in the Yucatán Peninsula, Walter Williams found the Maya people to be very accepting of homosexual behavior between young men and teenagers. Historically, homosexual bonds were considered normal among young men, a pattern which continues to this day.

Williams wrote “After my arrival in Yucatán, I soon learned that the society provides a de facto acceptance of same-sex relations for males. It did not take long to establish contacts, and my informants suggested that a large majority of the male population is at certain times sexually active with other males. This usually occurs in the years between thirteen and thirty, when sexual desire is strongest, but it also involves men older than that. Marriage to a woman does not seem to have much effect on the occurrence and amount of homosexual behavior.”

I began my life in the South and for five years lived as a closeted teacher, but am now making a new life for myself as an oral historian in New England. I think my life will work out the way it was always meant to be. That doesn't mean there won't be ups and downs; that's all part of life. It means I just have to be patient. I feel like October 7, 2015 is my new birthday. It's a beginning filled with great hope. It's a second chance to live my life…not anyone else's. My profile picture is "David and Me," 2001 painting by artist Steve Walker. It happens to be one of my favorite modern gay art pieces. END_OF_DOCUMENT_TOKEN_TO_BE_REPLACED
This entry was posted on Wednesday, May 28th, 2014 at 7:00 am and posted in Travel. You can follow any responses to this entry through the RSS 2.0 feed.
« Travelin’ Thru
Cozumel »