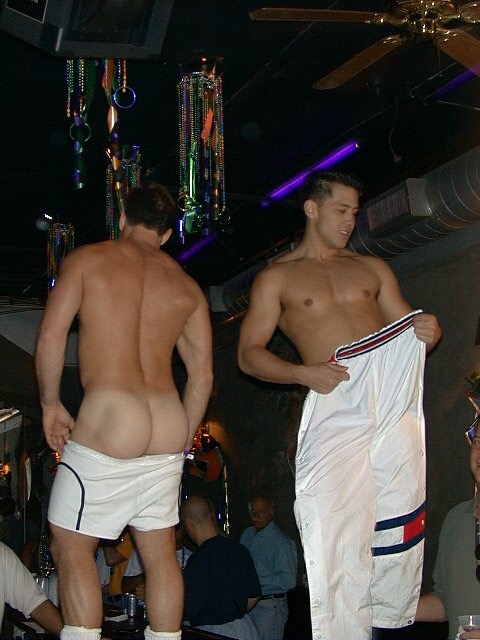 Charles Beaumont wrote the short story “The Crooked Man,” which presented a dystopian future wherein heterosexuality is stigmatized in the same way that homosexuality was in the 1950s. It depicts heterosexuals living as furtively as pre-Stonewall gays and lesbians. “The Crooked Man” was first rejected by Esquire magazine, which found it too controversial, and then published by Hugh Hefner, a young man from Chicago who had recently launched a magazine called Playboy. After letters of outrage at Beaumont’s “The Crooked Man” poured in, Hefner addressed readers. “If it was wrong to persecute heterosexuals in a homosexual society,” he wrote in response, “then the reverse was wrong, too.”

“The Crooked Man” is really just a couple of scenes. A handsome young man named Jesse furtively ducks into a nightclub. He sits in a private booth, closes the beaded curtain around the booth, and dims the light. He is instantly hit-on by two separate men. The men have a code, fingers tapping across the stomach, to indicate that they want sex. Jesse turns them down. He is waiting for someone — a woman named Mina.

Jesse is in love with Mina, but this future love between heterosexual couples is forbidden. Artificial insemination is the law, and the sexes are strictly segregated. Heterosexuals are considered perverts, and hunting them down is official government policy: “These sick people must be cured and made normal,” announces the platform of the majority political party. Jesse has learned to “pass” in this culture. He learns how to walk gay, and turn down sexual advances — which seem to happen constantly — with tact.

Mina shows up. She is disguised, her flowing blonde hair tucked under a wig. Yet it’s very difficult to hide the movement and expressions of a woman, and she and Jesse are found out. He is quickly removed to a government van, which will take him for surgery, re-education, the works.

Though Hefner is most famous for his numerous romantic exploits over the years, he has always been a proponent of sexual freedom: heterosexual, homosexual, or bisexual.  Even now, the twice-divorced 89-year-old entrepreneur says that gay marriage isn’t hurting anyone.  “Without question, love in its various permutations is what we need more of in this world,” he said. “The idea that the concept of marriage will be sullied by same-sex marriage is ridiculous. Heterosexuals haven’t been doing that well at it on their own.”  Hefner should know, he’s been married three times already.

I began my life in the South and for five years lived as a closeted teacher, but am now making a new life for myself as an oral historian in New England. I think my life will work out the way it was always meant to be. That doesn't mean there won't be ups and downs; that's all part of life. It means I just have to be patient. I feel like October 7, 2015 is my new birthday. It's a beginning filled with great hope. It's a second chance to live my life…not anyone else's. My profile picture is "David and Me," 2001 painting by artist Steve Walker. It happens to be one of my favorite modern gay art pieces. END_OF_DOCUMENT_TOKEN_TO_BE_REPLACED
This entry was posted on Monday, May 11th, 2015 at 7:00 am and posted in History, Literature. You can follow any responses to this entry through the RSS 2.0 feed.
« Shall We Gather at the River?
Field in Spring »