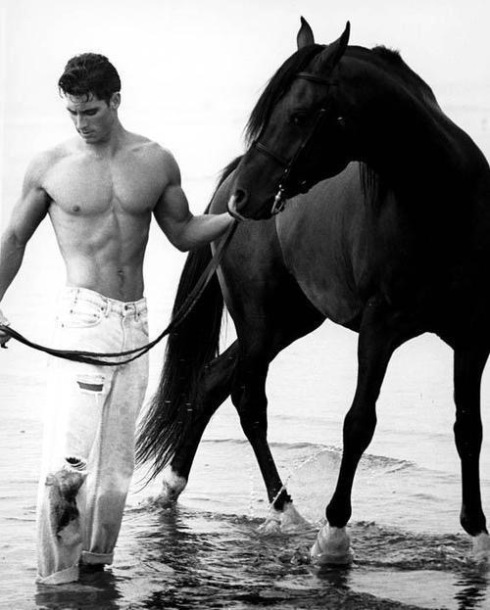 This blog post was written for three reason: 1) I like the three pictures in this post and wanted a way to use them (even if only one is black horse like Bucephalus), 2) Alexander the Great has always been a hero of mine since he was both a gay man and military genius and I’m a gay man and a military historian, and 3) I like this story.

Bucephalus was Alexander the Great’s horse and is considered by some to be the most famous horse in history. Alexander and Bucephalus’ initial meeting was unique but demonstrated the true character of one of the greatest generals in all of history. Initially, Bucephalus was brought to Macedonia and presented to King Phillip II (Alexander’s father) in 346 BCE by Philoneicus of Thessaly. With a price tag almost three times the norm (13 talents), the beautiful black horse stood taller than the normal Macedonian steed but was considered too wild and unmanageable, rearing up against anyone who came near him. Phillip ordered him led away.

Alexander sat in the audience with his mother Olympias watching the spectacle before him. As the attendants tried to lead Bucephalus away, Alexander rose calling them spineless. According to Plutarch’s biography of Alexander, the young prince said, “What as excellent horse do they lose for want of address and boldness to manage him.” At first Phillip ignored the challenge, but finally said to Alexander, “Do you reproach those who are older than yourself, as if you were better able to manage him than they.” Alexander, ignoring his father remark, repeated his challenge and said he would pay for the horse if he, Alexander, were unable to tame him.

Amid wild laughter, Alexander approached the horse he would name Bucephalus calmly. He had realized something the others had not — the horse was afraid of his own shadow. Turning Bucephalus toward the sun so his shadow was behind him and slowing taking the reins in his hand, Alexander mounted him. The laughter of the crowd turned to cheers as Alexander rode off.

According to Plutarch, as Alexander returned to the arena with Bucephalus and dismounted, Phillip said, “O my son look thee out a kingdom equal to and worthy of thyself, for Macedonia is too little for thee.” Historians claim this taming of the wild Bucephalus was a turning point in the young prince’s life, demonstrating the confidence and determination he was to show in his conquest of Asia.

Bucephalus and Alexander were inseparable; only Alexander could ride him, and indeed he did, into every battle from the conquest of the Greek city-states and Thebes through Gaugamela and into India. After the final defeat of Darius, Bucephalus was kidnapped while Alexander was away on excursion. Upon returning and learning of the theft, Alexander promised to fell every tree, lay the countryside to waste, and slaughter every inhabitant in the region. The horse was soon returned along with a plea for mercy.
Although historians disagree on the cause of the horse’s death – some claim he died from battle wounds – most agree he died of old age after the Battle of Hydaspes River (326 BCE). While Plutarch spoke of both possible causes of death, he cites Onesicritus, a historian who accompanied Alexander on his conquests, as stating the horse died of old age. However Bucephalus died, in mourning, Alexander founded a city in his beloved horse’s memory and named it Bucephala.

I began my life in the South and for five years lived as a closeted teacher, but am now making a new life for myself as an oral historian in New England. I think my life will work out the way it was always meant to be. That doesn't mean there won't be ups and downs; that's all part of life. It means I just have to be patient. I feel like October 7, 2015 is my new birthday. It's a beginning filled with great hope. It's a second chance to live my life…not anyone else's. My profile picture is "David and Me," 2001 painting by artist Steve Walker. It happens to be one of my favorite modern gay art pieces. END_OF_DOCUMENT_TOKEN_TO_BE_REPLACED
This entry was posted on Thursday, January 21st, 2016 at 7:00 am and posted in History. You can follow any responses to this entry through the RSS 2.0 feed.
« Pondering
Catharsis  »