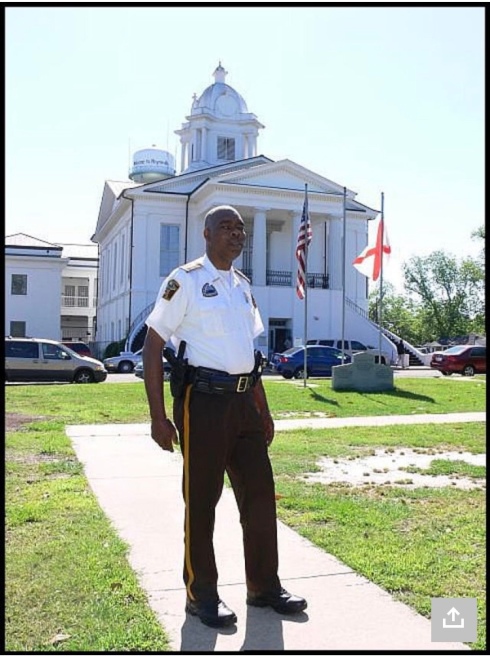 Some of you may have heard on the news that an Alabama sheriff was shot and killed last night. “Big John” Williams was not just any sheriff, he had been my sheriff. My mother called me just before the news broke. He was murdered not 200 yards from where my grandparents used to live and maybe 500 yards from where I used to live. According to my mother, Big John had been called to the QV gas station about a disturbance of the peace. An 18 year old white man was playing his music too loudly, and the gas station personnel or someone at the station had complained. Big John answered the call. When he asked the guy to turn down his music, the guy pulled a gun on him and shot him to death, probably because he didn’t like a black man telling him what to do. William Chase Johnson, the suspect, is currently in custody. If he lives to see trial, and I’m not betting on that, Johnson will receive the death penalty. I know the judge, I taught her children. He’ll never see freedom again.
Lowndes County, Alabama is a radially divided county in Alabama’s Black Belt. However, Big John had always worked to make race relations better when many of the politicians in the county had worked to further the divide. He would sometimes be the only black man at events at the private school in the county, though there was one black family who had children there, so I guess he wasn’t always the only black face. Big John never seemed to see color. He treated everyone with equality and respect. He was much loved because of it. My Facebook this morning was full of tributes from the people I am friends with in the county.
Big John had spent his life serving others. First, as a US Marine, then, as a police officer and sheriff’s deputy and finally, as the sheriff.

I began my life in the South and for five years lived as a closeted teacher, but am now making a new life for myself as an oral historian in New England. I think my life will work out the way it was always meant to be. That doesn't mean there won't be ups and downs; that's all part of life. It means I just have to be patient. I feel like October 7, 2015 is my new birthday. It's a beginning filled with great hope. It's a second chance to live my life…not anyone else's. My profile picture is "David and Me," 2001 painting by artist Steve Walker. It happens to be one of my favorite modern gay art pieces. END_OF_DOCUMENT_TOKEN_TO_BE_REPLACED
This entry was posted on Sunday, November 24th, 2019 at 1:00 pm and posted in News. You can follow any responses to this entry through the RSS 2.0 feed.
« Lost It’s Flavor
Pic of the Day »