The Legend of Hua Mulan

The name Hua Mulan has been synonymous with the word “heroine” for hundreds of years in Chinese society and culture. Disney’s 1998 animated film, “Mulan,” brought her name to a wider audience.

A historical figure famous for disguising herself as a man is Hua Mulan. Her name has long been synonymous with the word “heroine”, yet opinions differ as to whether this is her real name. According to Annals of the Ming, her surname is Zhu, while the Annals of the Qing say it is Wei. Xu Wei offers yet another alternative when, in his play, Mulan Joins the Army for Her Father, he gives her the surname Hua. Others using The Ballad of Mulan as their guide have attributed her surname to be Mu.

There is also some confusion concerning her place of origin and the era in which she lived. She is said by some to have come from the Wan County in Hebei, others believed she came from the Shangqiu province in Henan and a third opinion is that she was native of the Liang prefecture in Gansu. One thing seems certain though. Hua Mulan was from the region known as the Central Plains.

Cheng Dachang of the Song Dynasty recorded that Hua Mulan lived during the Sui and the Tang Dynasties. Song Xiangfeng of the Qing Dynasty asserted that she was of Sui origins (AD 581-618) while Yao Ying, also of the Qing Dynasty, believed she was from the time of the Six Dynasties. No record of her achievements appears in official history books prior to the Song times. Stories circulated in China’s Central Plains indicate that she must have lived before the Tang Dynasty.

Both history books and legends do at least agree on one thing – her accomplishments. It is said that Hua Mulan’s father received an order to serve in the army. He had fought before but, by this time, was old and infirm. Hua Mulan knew it was out of the question for her father to go and her only brother was much too young. She decided to disguise herself as a man and take her father’s place. 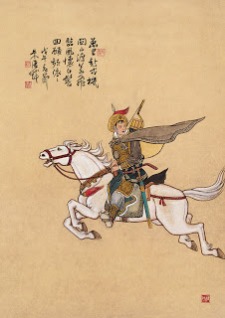 Only later, when her former comrades in arms went to visit her, did they learn that she was a woman.  The story of Hua Mulan is well known and has provided much inspiration for poetry, essays, operas and paintings.

A play written in her honor, the Mu-Lan Play ends with the following lines:

She had much fighting ability, and could act the leader. Her body passed through one hundred battles, always at the front, and compared to the fiercest soldiers, she was still better.

I began my life in the South and for five years lived as a closeted teacher, but am now making a new life for myself as an oral historian in New England. I think my life will work out the way it was always meant to be. That doesn't mean there won't be ups and downs; that's all part of life. It means I just have to be patient. I feel like October 7, 2015 is my new birthday. It's a beginning filled with great hope. It's a second chance to live my life…not anyone else's. My profile picture is "David and Me," 2001 painting by artist Steve Walker. It happens to be one of my favorite modern gay art pieces. END_OF_DOCUMENT_TOKEN_TO_BE_REPLACED
This entry was posted on Monday, January 30th, 2012 at 8:11 am and posted in History. You can follow any responses to this entry through the RSS 2.0 feed.
« Meditation
The Bistro at the Bijou »

3 responses to “The Legend of Hua Mulan”