The Ballad of Hua Mulan 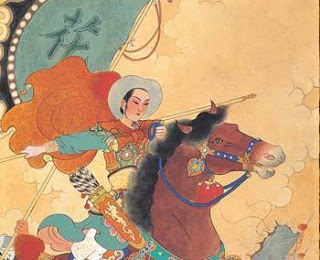 This poem was composed in the fifth or sixth century CE. At the time, China was divided between north and south. The rulers of the northern dynasties were from non-Han ethnic groups, most of them from Turkic peoples such as the Toba (Tuoba, also known as Xianbei), whose Northern Wei dynasty ruled most of northern China from 386–534. This background explains why the character Mulan refers to the Son of Heaven as “Khan” — the title given to rulers among the pastoral nomadic people of the north, including the Xianbei — one of the many reasons why the images conveyed in the movie “Mulan” of a stereotypically Confucian Chinese civilization fighting against the barbaric “Huns” to the north are inaccurate. 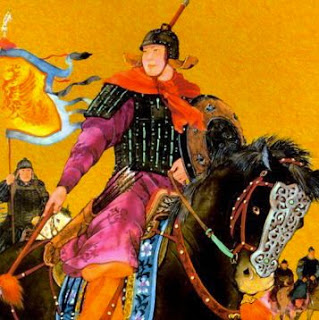 Tsiek tsiek and again tsiek tsiek,
Mulan weaves, facing the door.
You don’t hear the shuttle’s sound,
You only hear Daughter’s sighs.
They ask Daughter who’s in her heart,
They ask Daughter who’s on her mind.
“No one is on Daughter’s heart,
No one is on Daughter’s mind.
Last night I saw the draft posters,
The Khan is calling many troops,
The army list is in twelve scrolls,
On every scroll there’s Father’s name.
Father has no grown-up son,
Mulan has no elder brother.
I want to buy a saddle and horse,
And serve in the army in Father’s place.

At dawn she takes leave of the Yellow River,
In the evening she arrives at Black Mountain.
She doesn’t hear the sound of Father and Mother calling,
She only hears Mount Yen’s nomad horses cry tsiu tsiu.
She goes ten thousand miles on the business of war,
She crosses passes and mountains like flying.
Northern gusts carry the rattle of army pots,
Chilly light shines on iron armor.
Generals die in a hundred battles,
Stout soldiers return after ten years.

On her return she sees the Son of Heaven,
The Son of Heaven sits in the Splendid Hall.
He gives out promotions in twelve ranks
And prizes of a hundred thousand and more.
The Khan asks her what she desires.
“Mulan has no use for a minister’s post.
I wish to ride a swift mount
To take me back to my home.”

When Father and Mother hear Daughter is coming
They go outside the wall to meet her, leaning on each other.
When Elder Sister hears Younger Sister is coming
She fixes her rouge, facing the door.
When Little Brother hears Elder Sister is coming
He whets the knife, quick quick, for pig and sheep.
“I open the door to my east chamber,
I sit on my couch in the west room,
I take off my wartime gown
And put on my old-time clothes.”
Facing the window she fixes her cloudlike hair,
Hanging up a mirror she dabs on yellow flower powder
She goes out the door and sees her comrades.
Her comrades are all amazed and perplexed.
Traveling together for twelve years
They didn’t know Mulan was a girl.
“The he-hare’s feet go hop and skip,
The she-hare’s eyes are muddled and fuddled.
Two hares running side by side close to the ground,
How can they tell if I am he or she?”

I began my life in the South and for five years lived as a closeted teacher, but am now making a new life for myself as an oral historian in New England. I think my life will work out the way it was always meant to be. That doesn't mean there won't be ups and downs; that's all part of life. It means I just have to be patient. I feel like October 7, 2015 is my new birthday. It's a beginning filled with great hope. It's a second chance to live my life…not anyone else's. My profile picture is "David and Me," 2001 painting by artist Steve Walker. It happens to be one of my favorite modern gay art pieces. END_OF_DOCUMENT_TOKEN_TO_BE_REPLACED
This entry was posted on Tuesday, January 31st, 2012 at 8:11 am and posted in History, Poetry. You can follow any responses to this entry through the RSS 2.0 feed.
« The Bistro at the Bijou
"David’s" Story: Gays and Modern China »

One response to “The Ballad of Hua Mulan”