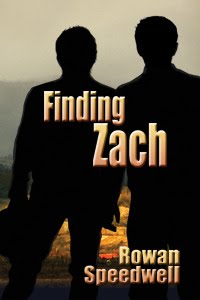 For five years, Zach Tyler, son of one of the world’s richest software moguls, was held hostage, tortured, and abused. When he is rescued at last from the Venezuelan jungle, he is physically and psychologically shattered, but he slowly begins to rebuild the life he should have had before an innocent kiss sent him into hell. His childhood best friend David has lived those years with overwhelming guilt and grief. Every relationship David has tried has fallen apart because of his feelings for a boy he thought dead. When Zach is rescued, David is overjoyed—and then crushed when Zach shuts him out. Two years later, David returns home, and he and Zach must come to terms with the rift between them, what they feel for each other, and what their future could hold. But Zach has secrets, and one of them might well destroy their fragile love.

Finding Zach is for sure one of those novels that uses angst to involve people in the story, but it also has its moments of tenderness and sweetness: in the end, the romance is so strong that it outbalances the sadness. This book was amazing. It started off and I was hooked immediately. My first thought was that I was afraid it was going to be a super quick read, but the author continues to spin the story, feelings and emotions together and around, pulling in new pieces seemingly forever.  In some books, that might be incredibly frustrating, but this is a book that you don’t want to end.

To me, pornography is writing about sex itself; the characters really don’t matter, the setting doesn’t matter, and there really is no story. Two men (or two women) meet, are attracted to each other, have some blistering hot sex, and then go their merry ways. We don’t know anything more about them than we did when we first met them.
Erotica, on the other hand, is about the characters; and needs to actually tell a story. Erotic fiction, to me, has to meet the standards of fiction—there has to be a change of some sort in the main character by the end of the story; the sex itself needs to be revelatory to the character in some way. (When I teach workshops, I say “If you can change the sex scene in your story to nothing more than and then they fucked, and the story still works, then it’s erotica.”)

I have to disagree when it comes to Finding Zach.  The sex scenes are an integral part of the book.  It helps the reader understand the characters in a more intimate way.
A little warning to the reader: don’t feel discouraged from the first pages; at first the story appears dark and without hope. This feeling will dissipate soon, and as I said, on the average there is more sweetness than angst; the relationship between Zach and David starts almost as soon as they meet again, and even if it will be not an easy ride, it will be something they will do together.
I hope that some of you will read this book.  It is well worth it.

I began my life in the South and for five years lived as a closeted teacher, but am now making a new life for myself as an oral historian in New England. I think my life will work out the way it was always meant to be. That doesn't mean there won't be ups and downs; that's all part of life. It means I just have to be patient. I feel like October 7, 2015 is my new birthday. It's a beginning filled with great hope. It's a second chance to live my life…not anyone else's. My profile picture is "David and Me," 2001 painting by artist Steve Walker. It happens to be one of my favorite modern gay art pieces. END_OF_DOCUMENT_TOKEN_TO_BE_REPLACED
This entry was posted on Wednesday, August 22nd, 2012 at 6:53 am and posted in Book Review. You can follow any responses to this entry through the RSS 2.0 feed.
« Jabberwocky
Top 25 LGBT-Friendly Colleges And Universities »