Politics and the Elephant in the Corner 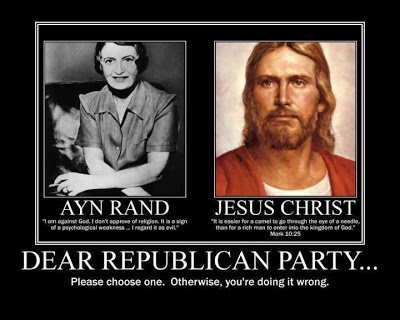 I always seem to make people mad when I talk about politics, but after seeing this, I just couldn’t help myself.  There are two things here I want to comment on.  First, when it comes to Paul Ryan, I just can’t make myself like because he is such a smart ass, and I deal with enough of those on a daily basis as a teacher that I don’t want one to be my country’s VP.  He also says that Ayn Rand is his idol.  And while she was a conservative, she was also an atheist.  She did an interview two years before her death with Phil Donahue which an excerpt of can be seen by following this link. (http://www.youtube.com/watch?v=8GS6vxb4H3M&sns=em).
The second thing I wanted to mention is the hypocrisy of Republicans who are ignoring this aspect of Ayn Rand while still saying that they are Christian conservatives.  This is the same Christian Right who the vast majority have said in the past that they do not believe that Mormons are Christians, but now that a Mormon is the Republican nominee, they have changed their tune.  I find the whole thing to be ridiculous.  Most mainline Protestants and Catholics have always seen Mormonism as a cult and not true followers of Christ, but now they are willing to forget this for Mitt Romney.  I personally think that Mormons tend to be very nice people, but I do not agree with them religiously.
Many of the Christian Right, at least the ones I have talked to, say that they would rather vote for a Mormon than a Muslim.  Also stating that at least they believe in the same God, but worship Him in a different way.  How is it that people still believe that Obama is a Muslim?  (If you are in doubt that Obama is a practicing Christian, read this article from Time Magazine: “The Obamas Find a Church Home — Away from Home” http://www.time.com/time/magazine/article/0,9171,1908437,00.html). I know people have the right to change their minds, but this is a drastic change.  Ignorance abounds throughout the political world and the voting public, but this election is showing America’s ignorance in politics and the politicians they support or not.  Maybe America should take a closer look at the elephant in the corner that everyone seems to be trying to ignore.
Okay, so that is my say (rant) on the subject. What do you guys have to say?

I began my life in the South and for five years lived as a closeted teacher, but am now making a new life for myself as an oral historian in New England. I think my life will work out the way it was always meant to be. That doesn't mean there won't be ups and downs; that's all part of life. It means I just have to be patient. I feel like October 7, 2015 is my new birthday. It's a beginning filled with great hope. It's a second chance to live my life…not anyone else's. My profile picture is "David and Me," 2001 painting by artist Steve Walker. It happens to be one of my favorite modern gay art pieces. END_OF_DOCUMENT_TOKEN_TO_BE_REPLACED
This entry was posted on Monday, October 15th, 2012 at 6:59 am and posted in Uncategorized. You can follow any responses to this entry through the RSS 2.0 feed.
« Forgiveness and Homosexuality
The Raven »

9 responses to “Politics and the Elephant in the Corner”