An Interesting "What If" Scenario

I love a good “what if” scenario.  One of my favorite series of books was Harry Turtledove’s Southern Victory alternative history novels.  In this series, the Confederacy wins the American Civil War and continues to exist as an independent nation into the mid-20th century. The series began with How Few Remain (1997) and continued with the The Great War Trilogy, The American Empire Trilogy, and The Settling Accounts Tetralogy.  I was very sad when the series came to an end.  For me, alternative scenarios are very fun especially if they are well thought out.
There is a current “what if” scenario brewing as the media tries to,predict the 2012 presidential race. Most polls in the presidential race show the national popular vote to be a virtual tie. But as we know, the popular does not pick the president. That’s the job of the Electoral College. And some election number crunchers are starting to explore the nightmare scenario of an Electoral College tie. It’s a remote possibility, but a possibility nonetheless.
Two hundred seventy electoral votes to win, there are scenarios, though, that would end up with a 269 to 269 tie. It’s quite remote. But we saw in 2000 that George W. Bush won with 271, so, you know, you can get awfully close. And we have eight states that are battlegrounds, tossups. That’s Nevada, Colorado, Iowa, Wisconsin, Ohio, New Hampshire, Virginia and Florida. And depending on how those electoral votes get distributed, it could actually wind up 269 all.  The number of solid electoral votes for Obama can then be assumed to be 201 and the number of solid Romney votes is 191. The most likely route to an Electoral College tie by far is in Romney winning Florida (29), North Carolina (15), Virginia (13), Colorado (9), Iowa (6) and Nevada (6), in addition to all of the states where he has a solid lead over Obama. 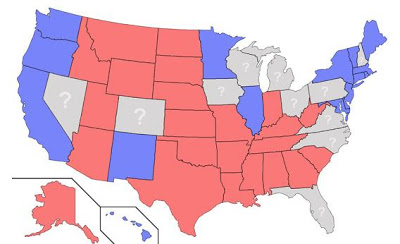 Maine and Nebraska both use an alternative method of distributing their electoral votes, called the Congressional District Method. Currently, these two states are the only two in the union that diverge from the traditional winner-take-all method of electoral vote allocation. In the year 2008, just the last presidential election, the congressional district around Omaha, Nebraska, favored Barack Obama. Now, the rest of the state went quite handily for John McCain. And we expect Nebraska to go quite handily for Mitt Romney. That could change the scenario by which we saw Mitt Romney winning with 270 electoral votes nationally – and it’s possible to put together that math – and then not winning because just that one city, just that one congressional district in Nebraska was taken away from his total of 270, leaving him at 269, and giving President Obama a tie.
So what would happen then?  It’s a bit complicated, but also a very interesting “what if” scenario.
The newly elected (incoming 2012) House of Representatives will count the Electoral College votes on January 6th.  These new members of Congress will be sworn in 3 days earlier on January 3rd.  If there is an Electoral College tie, the House of Representatives will elect the President.
Each state delegation, not each Representative, gets one vote in this process. The House members  from each State must agree on who to give their vote to from the 3 candidates who received the most electoral votes.  That means that while California’s 53 Representatives must decide amongst themselves who to cast their one vote for, Vermont congressman Peter Welch must only consult himself before getting the same amount of votes as California.  So, if an Electoral College voter in any State decided to vote for someone other than Obama or Romney (“faithless elector”), that person could also be an option for the House members.
Three times in history, the house has decided who the president would be. In 1800, they decided the electoral college tie between Thomas Jefferson and Aaron Burr. In 1824, they decided the four-way race in which the candidate who won the plurality of electoral votes, Andrew Jackson, lost to John Quincy Adams. In 1876, they decided the infamous Hayes/Tilden election, which led to the Compromise of 1877 and the end of Reconstruction.
Some States may have equal numbers of Democrats and Republicans in the House of Representatives, and those House members will have to choose whether to follow their party or, follow the wishes of their State.   The House vote for President is over when a candidate gets 26 votes (majority).  If a delegation is split, that State might not cast a vote.  The winner of the Presidency must get 26 votes.  It is possible that due to ties in multiple States, multiple votes would not be cast.  The hope is, however, that democracy will prevail and a President will be selected. (Probably Romney if Republicans win projected House seats)
If there is a tie in the Electoral College, the Senate will select the Vice-President.  Each Senator gets one vote, and can choose from the top 2 candidates who receive votes from the Electoral College.  The candidate who gets 51 votes (majority) will be the Vice-President on January 20th. (Probably Biden if Democrats continue to control the Senate as expected.). In the case of a tie, Biden would cast the deciding vote for Vice President.
If the House of Representatives cannot come up with a winner by January 20th, then whomever the Senate elects as Vice-President becomes interim President until the House can pick a President.  If the Senate is also unable to reach a decision by January 20th, then the Speaker of the House becomes the temporary President.  Therefore, John Boehner could temporarily become President. If John Boehner does not want the job, which is possible, then Daniel Inouye (D-HI), the President pro-tem (President of the Senate when the Vice-President is not there) would become President until the House selects the President.  Boehner might actually turn the temporary position down because when he becomes interim President, the House of Representatives would have to pick a new Speaker, and upon his return, he would be a “regular” member of the Congress.  He would no longer be Speaker of the House, if he were to take the job as President, even temporarily.
The Electoral College has nearly always produced a winner–so far, with the only exceptions being the elections of 1800, 1824, and 1876 as mentioned above.  While it has not always picked a winner, it usually gets something on paper. Congress will only have 14 days to pick a President, provided the Supreme Court does not have to get involved to settle disputes at the State level.  The Constitution and Federal Election Laws cover many different possible scenarios.  However, many aspects of a tie in the Electoral College have not been taken into account and could provide for some interesting results.

I began my life in the South and for five years lived as a closeted teacher, but am now making a new life for myself as an oral historian in New England. I think my life will work out the way it was always meant to be. That doesn't mean there won't be ups and downs; that's all part of life. It means I just have to be patient. I feel like October 7, 2015 is my new birthday. It's a beginning filled with great hope. It's a second chance to live my life…not anyone else's. My profile picture is "David and Me," 2001 painting by artist Steve Walker. It happens to be one of my favorite modern gay art pieces. END_OF_DOCUMENT_TOKEN_TO_BE_REPLACED
This entry was posted on Friday, October 26th, 2012 at 7:15 am and posted in Uncategorized. You can follow any responses to this entry through the RSS 2.0 feed.
« Witch’s Brew
Moment of Zen: WORK »

5 responses to “An Interesting "What If" Scenario”