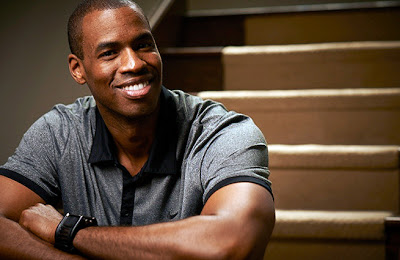 Before Monday, I had never heard of Jason Collins. I’m not a huge pro sports fan, though I do love college sports, so it shouldn’t be a surprise that I was not familiar with him. After his announcement, I did some reading about him. In case you are not familiar with the story, NBA player Jason Collins took the sports world by surprise when he came out publicly on Monday, becoming the first openly gay athlete ever in major U.S. professional sports. Collins wrote in a Sports Illustrated op-ed, “I didn’t set out to be the first openly gay athlete playing in a major American team sport. But since I am, I’m happy to start the conversation.”

So far, Collins’ announcement has been received with much support, which is fantastic. One can only hope that this will influence the next generation, who will learn that it is possible – despite all the stereotypes that suggest otherwise – to be a gay man and an athlete, and also that gay men can lead successful, proud, open lives in all sorts of fields, including athletics.

Imagine being a young person who dreams of a sporting career but believes that sports teams are homophobic, unwelcoming places; Collins is proof that this doesn’t have to be the case. We just have to hope that he faces no difficulties due to being openly gay and proud, and that more athletes come out soon too.

Of course there has been some backlash. Rush Limbaugh lamented on Tuesday what he called the lack of “tolerance” for anti-gay reactions to Jason Collins’ coming out. Even though the NBA, the White House and Bill Clinton have praised Collins for his announcement, Limbaugh felt differently, which should come as no big surprise. “Why can’t everyone just put your sexual preferences on Facebook and call it a day? Why do we need to stop everything and have a national day of celebration, or mourning, depending on your point of view… about this?” the radio host wondered on Tuesday. “And this tolerance only goes one way.”

Limbaugh is missing the point, by a long shot. In this day and age, we need publicly out figures to be an encouragement. We need people like Collins to come out, so that others can as well. We need the role models. For a celebrity, it can’t be a subtle coming out. Someday, it won’t be like this, but someone has to begin the process. As tennis player and gay rights activist Billie Jean King has suggested, this news item is great, but it’s also a shame in a way – it would be better if people didn’t need to come out, and if instead everyone were accepted for who they are. We shouldn’t have to defend ourselves, but since the world isn’t yet at that stage, unfortunately we still need people such as Jason Collins.

Collins was extremely brave to come out, especially since he becomes a free agent on July 1 — meaning that he will first have to sign with an NBA team and wait until next season to see if teammates, coaches, opponents and fans will treat him any differently. So the question now is whether any general manager will sign Collins to another deal. With it would flow all the attention and scrutiny that comes with signing this modern gay-rights and sports icon. It would also mean that young athletes around the country would get to watch a publicly gay basketball player on the court on a regular basis.

Brooklyn Nets veteran Jerry Stackhouse, who has called Collins a friend for years, stated, “I think the real response will be once he gets a job….It’s not like he’s under contract next year and guaranteed to go back to a team. I think once that happens, then public opinion or whatever or players’ opinion will start to loom a little larger then. But right now we’ve got the summer to kind of digest what has happened, and I’m pulling for him.” I’m pulling for Collins too.

Golden State Warriors President and COO Rick Welts, the highest-ranking executive in men’s professional team sports to publicly acknowledge he is gay, said he thinks there will be a place in the league for Collins. “He absolutely will receive more opportunities,” Welts said. “A lot more doors will open for Jason than are going to close because of what he did (Monday).” We can certainly hope so.

His coming out has already been an opportunity for me as a teacher. One of my students, the same one I spoke of in an earlier post who came across some evidence that another student was gay, asked me if I had seen the news. I didn’t immediately know what he was talking about, but then he asked me if I had heard about the NBA player who came out. From there we had a very good class discussion about why this was such a momentous event and how brave Collins was to do so. I had just finished teaching the Civil Rights Movement last week (not an easy task when you teach at a majority white private school that was in the center of the civil rights struggle). We had also begun discussing the Vietnam War this week. I was able to bring up the Stonewall Riots, which is not in our textbook, and to discuss the role of the early homophile in attempting to remove the ban on gays in the military, how that had changed as the reality of Vietnam became known, and how we have eventually been able to repeal DADT.

Besides having a great discussion about equal rights, not a single person said anything negative about gay people. Nearly everyone saw Collins’s coming out as a positive thing. Someone did mention something about the locker room situation, but someone else countered with, “He’s the same person they’ve always taken a shower with, what difference should it make.” Truthfully, though I didn’t point this out to the kids, if a guy has been to a gym, then there is a high likelihood that they’ve already showered with a gay man.

I have one last thing to add that I found quite interesting about Jason Collins’s coming out. Collins has gone even further than many others in regard to coming-out statements, because he also noted the importance of his race and religion to him, and his desire to start a family. So besides shattering the idea that professional sports are not queer spaces, he also has helped remind people that gay men can be black, they can be religious Christians, and they can be looking to create nuclear families; gays are from every walk of life, just like straight people, which is one of the most important lessons that people can learn. I think that because a few of my students knowing that a fellow classmate is gay has given them a new perspective. Knowing is different from suspecting, and it puts a real face to LGBT people, and I honestly believe that it is making a difference, just as Collins becoming the first out gay man in a major U.S. professional sport will make a difference.

I began my life in the South and for five years lived as a closeted teacher, but am now making a new life for myself as an oral historian in New England. I think my life will work out the way it was always meant to be. That doesn't mean there won't be ups and downs; that's all part of life. It means I just have to be patient. I feel like October 7, 2015 is my new birthday. It's a beginning filled with great hope. It's a second chance to live my life…not anyone else's. My profile picture is "David and Me," 2001 painting by artist Steve Walker. It happens to be one of my favorite modern gay art pieces. END_OF_DOCUMENT_TOKEN_TO_BE_REPLACED
This entry was posted on Tuesday, April 30th, 2013 at 11:46 pm and posted in Uncategorized. You can follow any responses to this entry through the RSS 2.0 feed.
« A Greek Island by Edward Hirsch
May is National Masturbation Month »

3 responses to “A Brave New World”