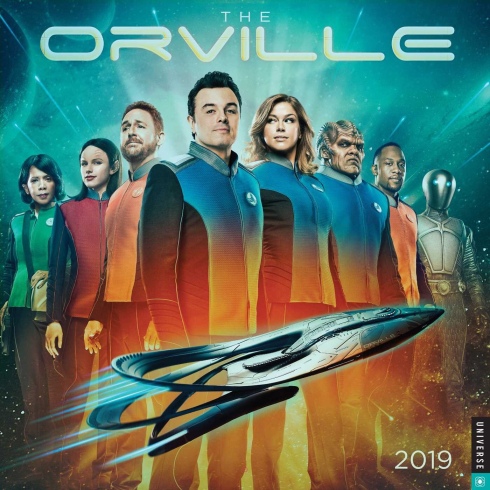 Monday, I talked about Star Trek: Discovery. Today, I want to discuss the show giving it a run for its money, except you can watch The Orville for free on Fox. The Orville is not the Star Trek spoof Fox originally advertised it to be. It’s much more. While the different Star Trek series did not contain a great deal of humor, many of the original Star Trek movies did. The Orville, created by and starring Seth McFarlane, has all the wonder of alien races and science fiction that Star Trek is known for, but also has the humor that was present in the movies. When The Orville premiered last year, many critics feared it would be Family Guy in space. That, it was not. Yes, some of the humor is a bit sophomoric, but the science fiction is first rate.
The Orville has the comedy and drama of the original Star Trek movies. While it does have the comedy, it also has true drama. When a same sex couple from a planet of all males has a daughter, there is serious issues to be considered. Then there was the ship of religious fanatics or a planet ruled by social media. These are issues that may not directly connect to the world today but the lessons in the episodes are real. The original Star Trek series dealt with real life issues head on as well. It broke down race barriers and even had a Russian on the bridge. In many ways, The Orville is what Star Trek tried to be, with a little humor added in.
So as excited as I am about Star Trek: Discovery, I am just as crazy about The Orville. If you’re a Star Trek fan, you don’t have to compare the two, though there are good comparisons in my opinion. The Orville is a show that can be enjoyed by science fiction fans in general. It’s a good show and if you’re aren’t watching it, you probably should be.

I began my life in the South and for five years lived as a closeted teacher, but am now making a new life for myself as an oral historian in New England. I think my life will work out the way it was always meant to be. That doesn't mean there won't be ups and downs; that's all part of life. It means I just have to be patient. I feel like October 7, 2015 is my new birthday. It's a beginning filled with great hope. It's a second chance to live my life…not anyone else's. My profile picture is "David and Me," 2001 painting by artist Steve Walker. It happens to be one of my favorite modern gay art pieces. END_OF_DOCUMENT_TOKEN_TO_BE_REPLACED
This entry was posted on Wednesday, March 20th, 2019 at 6:00 am and posted in Television. You can follow any responses to this entry through the RSS 2.0 feed.
« Vernal Equinox
Pic of the Day »

One response to “The Orville”